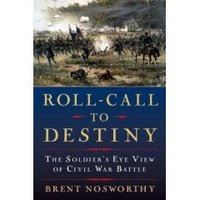 In The Bloody Crucible of Courage, a frustrated military historian, Brent Nosworthy, unloaded 600+ pages of criticism on those lovable, irresponsible rascals known as Civil War historians. He believes that undertaking military history involves obligations greater than "telling a good story" or weaving together colorful anecdotes.

His method was constructive: he pointed out failure in an analysis that generally kept a neutral tone while making clear what had to be fixed and how. It was impossible to mistake his central concern, that Civil War history - as a branch of military history - has been broken for a long time.

His new book, Roll Call to Destiny, is a continuation of Crucible, Nosworthy says in the introduction. Within the page budget of Crucible, it was not possible to add hundreds more pages of how-to material, showing historians by example what he expected them to do. Here he has developed tutorials for them, presenting different accounts of unit actions over the course of the war, varied between north and south and among service branches.

This is a very impressive artifact of military science and historiography which the publisher (with the author's collaboration) seems to be aiming at the most ignorant segment of the reading public. Hence the subtitle: The Soldier's Eye View of Civil War Battles. "Buttstrokes and Bayonet Charges" might have served even better in that respect and it would be just as misleading. Even if we dumbed down the content to its lowest level, stripped off the anlytic and normative elements, we would be left with "Units in Civil War Battles."

Imagine the level of military detail and insight of The Wilderness Campaign by Edward Steere with additional context layered on: contemporary European practice; early war vs. late war; soldierly tricks of the trade; analysis of the materiel at unit level; etc. Here's one of many a Steerian moment:

They noticed that the Union infantrymen were carrying their shoulder arms at the "right shoulder shift;" the color-bearers carried their standards "aslant" on their shoulders. This means they were probably advancing either at the double (140 paces per minute) or at the run (where they ran as fast as they could).

Here's another, explaining how batterymen could believe they were inflicting huge casualties where few were occurring:

... it is known that men at long, and even medium, ranges could see incoming projectiles, and frequently could move out of the way. From the [Washington Artillery] artillerists'point of view [on Marye's Heights], the effect was something like the "parting of the Red Sea" when the attacker advanced in a deep enough formation; to the gunners it looked as though swathes of men were being cut down, when in fact casualties might be fairly light.

There will be many surprises here for the experienced reader of bad battle books; I was especially taken at one point when Nosworthy parameterized a commander's intentions by looking at his selection of movement formation.

The most accurate blurb on the book comes from a fellow I have not laid eyes on in 36 years, fraternity brother LTC Roger Cirillo: "[Nosworthy understands] how doctrine, training, and weaponry affect the outcomes of fighting at the unit level." These are the missing ingredients that make so much Civil War history unreadable for so many of us. Roger sums up, "This work is must reading for anyone wanting to understand the technique of war."

The technique of war. Even better than what an earlier reviewer said about Crucible "watering a potential desert." But there's more. There's the rolling critique of Jominian military ideology and its exponent Henry Halleck; there's the thumbnail history of Civil War history since 1865; and mainly, there's an understanding that Civil War history has been so monumentally screwed up for so long that

The ease with which a patient researcher can come up with a new but justified interpretation of an already well-documented event, or be the first one to plot what is still uncharted territory, is truly counterintuitive.

As readers of this blog know.

In writing about ACW narratives, Nosworthy will resort to the term "folkloric." Here he proposes to show how to purge the folklore and end the truancy of the ACW author.

p.s. I make his tone sound strident but Nosworthy actually wonders in his introduction whether this book will be of use to anyone. I would be very interested to someday read the opinions of Harry Smeltzer on Nosworthy's Bull Run chapter and of Eric Wittenberg or J.D. Petruzzi on his cavalry chapter - whether Nosworthy has added enough in either area to claim "value added."