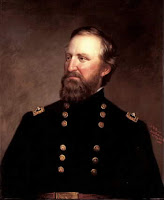 Having explored the difference between speculative history and conspiracy theory, we are ready to unwind the events - in a safe and sane manner - surrounding the death threat conveyed to George B. McClellan by Allan Pinkerton (through Col. Edward Wright) on October 28, 1864. First, the background parts.

When last we left John Wool, he had written an angry letter to the Army and Navy Journal in September of 1864 denouncing McClellan and a "wide-spread conspiracy" saying "The conspirator[s] have secret associations, whose members are scattered over the land," and "The perils of the Union were never greater than at the present moment." He implicated McClellan in the conspiracy with the comment, "At a future day I may present facts which will substantiate all I have said in regard to this dangerous conspiracy and their convention and their candidates for the Presidency." (Emphasis added.)

Before Wool reached this fever pitch of suspicion, beginning in June of 1864 a series of alarming letters had been sent to Lincoln directly by William Rosecrans from Missouri. Only one of these is readily available online and I post it in full with my emphasis added in bold. This is the synopsis conveying a more detailed report delivered separately by hand running over 1,000 pages.

Since Major Hays departure bearing my letter about the secret conspiracy we have been tracing out, we have added much information of its southern connexions operations uses and intentions.

We have have also found a new element in its workings under the name of McClellan minute men.

The evident extent, and anti national purposes of this great conspiracy, compel me to urge the consideration of what ought to be done to anticipate its workings and prevent the mischief it is capable of producing again upon your attention.

Therefore I have sent the report of Col Sanderson with the details of evidence covering a thousand pages of foolscap [roughly legal-size paper] by himself to be carried or forwarded to you by safe hands.

That Report and its acompanying papers, show

1. That there exists an oath-bound secret society, under various names but forming one brotherhood both in the rebel and loyal states, the objects of which are the overthrow of the existing national government, and the dismemberment of this nation.

2. That the secret oaths bind these conspirators to revolution and all its consequences of murder arson pillage and an untold train of crimes, including assassination and perjury under the penalty of death to the disobedient or recusant.

3. That they intend to operate in conjunction with rebel movements this summer to revolutionize the loyal states, if they can.

5. That this association is now and has been the principal agency by which spying and supplying rebels with means of war are carried on between the loyal and rebel states, and that even some of our officers are engaged in it.

Besides which prominent & general facts, the names of members mode of operating and other details appear fully showing what a formidable power and what agencies for mischief we have to deal with.

With this synopsis of the Report it is respectfully submitted with the single remark that whatever orders you may deem best to give it must be obvious to your Excellency that leading conspirators like Chas S. Hunt & Dr Reed Shore of of St Louis arrested for being implicated in the association cannot be released without serious hazzard to the public welfare & safety--

As history readers, we can beat ourselves up for dabbling in "conspiracy theory" but the principals actually lived it from day to day.