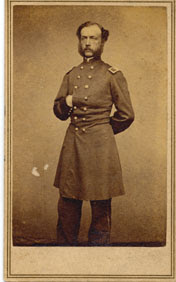 The story so far: With the election looming, the government begins a roundup of civilian conspirators operating as "The Sons of Liberty" putting them before military commissions answering to Stanton's friend and appointee Judge Joseph Holt.

Felix Stidger, an infiltrator of the conspiracy, recalls in his memoirs that there was insufficient evidence to prosecute all the conspirators, in other words, there were (in modern parlance) unindicted co-conspirators at large.

Judge Holt, in a report to Stanton on the results of Rosecrans's and Carrington's investigations into the conspiracy, notes the same; he also conflates the Sons of Liberty with a New York organization calling itself "the McClellan Minute Guard." He further connects the mish-mashed Sons/Guard with what he calls "the McClellan interest" and indirectly with McClellan himself. He promises "military surveillance" over the unindicted.

Given the intensity of feeling, Holt's prediliction for blurring distinctions, and the opportunity to destroy a perceived opponent of Lincoln, did Holt and Stanton broaden the category of unindicted co-conspirators beyond what what the investigation produced or the law allowed? Did they use the existence of unprosecuted conspirators to persecute political enemies not connected to the Sons?

The following letter is unknown to Civil War historians, although it has been in plain view among the McClellan Papers forever. Only Stephen Sears has ever mentioned it and that in passing, in paraphrase, in brief, in his Young Napoleon biography. He seemed puzzled by it and eager to move on.

We, on the other hand, have enough context to consider it in the fullness it deserves. It was supplied to McClellan's literary executor for possible inclusion in the posthumous McClellan's Own Story but was not used.

From Reel 60, The McClellan Papers, microfilm edition: a letter from Edward H. Wright to George Ticknor Curtis. Col. Edward Wright was the son of Gen. Horatio Wright and a former aide to General McClellan:

In reply to your letter of the 23rd in reference to an interview with Gen. McClellan at his home on Orange Mountain about the time of the Presidential election in 1864 at which interview you were present, I hasten to make the following statement.

The interview was not on the day after the Presidential election but about nine o'clock on the morning of the 29th of October.

On the evening of the 26th of October at a late hour Gen. McClellan, with some friends, called on me at my father's house, bringing with them a message from Pinkerton, the chief detective of the War Department, asking for an interview with me at either Philadelphia or Baltimore and stating that he had information in reference to the approaching Presidential election which he was unwilling to give to any of McClellan's friends but myself.

I was to go to Philadelphia and await a visitor at the Continental Hotel. In case of no one appearing during the day, I was to leave by the night train for Baltimore go to Barnum's Hotel and remain there till recognized.

In pursuance of these instructions I left on the morning of the 27th for Philadelphia and while there called on Dr. John McClellan meeting Gen. Andrew Porter to whom I stated my business.

No one calling for me at Philadelphia I took the night train for Baltimore, and soon after reaching there on the following morning I was accosted by a stranger and conducted to a house some blocks in the rear of the hotel, where I was left alone in the front room of the second story. 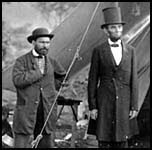 In a few moments Pinkerton entered the room.

The first statement he made was that a conspiracy to assassinate Mr. Lincoln existed among the friends of McClellan, that every one of the conspirators was known and watched and on the slightest movement on their part all would be arrested and hung.

I asked him for the names of these men.

He mentioned the names of yourself, Colonel Key, Mr. Belmont [campaign manager for Buchanan and Douglas, leading backer of McClellan] and my own name with those of others I do not recall.

I treated his statement as an absurdity, and asked him if he had anything else to say.

He then said he was a friend of McClellan and wished to serve him in every way he could. That McClellan and his friends might as well give up the fight; that the elections would be carried for Mr. Lincoln by such majorities as they wished; that Pennsylvanians would give any majority they called for, that with the exception of New Jersey, about which they cared nothing, every state would give Mr. Lincoln its vote, and it would be seen to that the majorities would be so overwhelming as to prevent any further opposition. That the attempt to get the soldiers' vote for McClellan would not be allowed to get beyond control. That the election was already settled, and that McClellan and his friends would get into serious trouble if they did not abstain from further action. That Mr. Lincoln knew of this interview, and that it was with a desire to befriend McClellan and save him from possible trouble that he had employed him (Pinkerton) in the matter.

After further conversation on these subjects, I took train for my home, reaching there on the morning of the 29th and reporting as soon as possible to Gen. McClellan at Orange when you were present.

Gen. McClellan treated the conspiracy nonsense as I had, and said he would not insult any of his friends by repeating such a charge to them. The information did not have the slightest effect on him or his friends. I was agreed that my interview with Pinkerton should not be spoken of to anyone.

I knew Pinkerton as the chief of the Detective bureau at the Headquarters of the Army of the Potomac while I was serving as an aid of McClellan. I believe he was honest in his assertion of friendship for McClellan, that he knew the desperate men in control of Washington and had their secrets, that he feared the zeal of some of McClellan's friends might be used by his enemies as an excuse for his arrest and trial by the pliant courts, and suborned witnesses of Stanton.

I believe Mr. Lincoln always felt kindly towards McClellan, and desired to befriend him as far as political necessities permitted.

Next:
Analyzing the letter and building a timeline