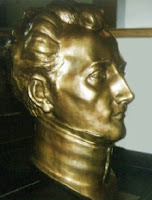 In recent posts, we began to explore James McPherson's expropriation of the idea "concentration in time"; the phrase appears in his new book Tried by War (see here and here) exactly as rendered both by Clausewitz and by Archer Jones (recapitulating Clausewitz) in the 1990s. Unattributed, "concentration in time" appears in his new book to be McPherson's idea.

Last month, Eric Foner's essay collection came out (Our Lincoln) with a piece on Lincoln-as-war-leader contributed by McPherson. McPherson again reiterated this paradigm, again without attribution.

McPherson admits having read Clausewitz in Tried by War; there are in fact two references here to the Prussian thinker. The first appears on page 6 and is worth quoting as an example of the typical amateur's mistakes of presentism and burdening a single point of information with unmanageable generalities.

Although Lincoln never read Carl [sic] von Clausewitz's famous treatise On War (Vom Kriege), his actions were a consumate expression of Clausewitz's central argument: "The political objective is the goal, war is the means of reaching it, and means can never be considered in isolation from their purpose..."

Typically, he cut this passage out of his Tried by War and pasted it, word for word, into Foner's book. In Foner's book, it is this "central argument" - alone and undeveloped - that makes Lincoln Clausewitzian.

In Tried by War, McPherson seems to have a new idea by page 142. There, he says, again with striking single mindedness,

In his conception of military strategy, Lincoln was Clausewitzian. The Prussian theorist of war had written that "the destruction of the enemy's force is the leading principle of war," and it "is principally effected only by means of the engagement" - that is by "hard, tough fighting."

So here, Lincoln is Clausewitzian because of hard fighting. He has forgotten the earlier claim. The two observations are offered independently. No discussion, just fiat.

It is worth a small digression into McPherson-as-synthesizer here. The quote from page 142 is not from Clausewitz, it is cited as from J.C. Wylie's book Military Strategy. For some reason, McPherson could not bring himself to retrieve the thought directly from On War. He felt he had to serve the hard fighting idea to his readers with attribution to Clausewitz via Wylie. What a curious reliance on secondary sources. What a curious fastidiousness toward Wylie vice a pernicious claim staked against Clausewitz and Jones in the matter of concentration in time.

Note that in neither offering (Foner's nor his own book) does McPherson expand beyond what I have given to explain Clausewitz vis a vis Lincoln. Nowhere does he give mention to Jomini, whom Lincoln not only read but as Hattaway and Jones have shown employed to argue plans with his generals.

You reach a point in the public estimation where such issues become mere quibbles I suppose.