More Gomorrah than the law allows 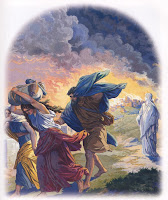 You've seen it on Drudge and elsewhere: the governor of Illinois has been arrested at long last.

The sudden resignation of Richard Norton Smith as head of the Abraham Lincoln Presidential Library and Museum (ALPLM) some two years ago now looks slightly less mysterious. Blagojevich, flaboyantly and openly pay-to-play, must have scared Smith.

This has ramifications for the past and present staffing of the ALPLM. Even Newsweek understood this three weeks ago, with the arrest of the ALPLM's political rainmaker.

I say "even Newsweek" because the community of Lincoln authors and scholars has maintained an ironclad silence, refusing to issue any comment about the ALPLM, its fallen director, its compromised board, and the context of corruption in which it operated. Future directions, suggestions for new directors? Nothing.

This tells us that Lincoln writers and researchers view the ALPLM as something owned and operated by Illinois (or "others") rather than something of their own. It suggests that this tourism mecca was "disowned" without fanfare early on and intellectual interest in it remains as low as it has ever been. That's the charitable explanation.

There is a second possibility. Here in the realm of Civil War history, we have all types of historians: researchers, storytellers, analysts, genealogists, collectors, art experts, antiquers, etc. On the other hand, I notice that the Lincoln crowd is all too much of one thing only: public historians.

As previously noted here, public historians have a Gomorrah ethos. As Lot argued with God that He should spare the cities on the plain if one righteous resident could be found, the public historian argues that no expense is wasted, no narrative is too twisted, no presentation is too perverse if even one little child can eventually be brought to the altar of history thereby.

This Gomorrah ethos explains how the Lincoln crowd can be indifferent to a Goodwin book, an ALPLM crisis, the Bicentennial minstrel show, endless knick knackery, and various publicly staged imbecilities. As long as the "greatness" message comes though, a child may feel the magic, and then someday...

What? Design fantasy exhibits for a patronage sink?