The author answers his critics 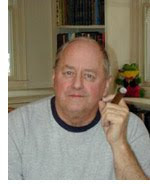 Way back, Ted Savas of Savas-Beatie, mentioned to me that Russel Beatie (right) was using his website to answer critics. I didn't think it was a good idea, so I am pleased to find no retorts on his site now.

My feelings are/were somewhat Beatie-specific. His more ardent critics almost drove me to write an extended series of essays on substantive criticism vs. frippery.

Major criticisms deserves a response but the author is too often tempted into overkill, chasing the critic's own smaller mistakes or errors in interpretation. Do you ever read magazines with letters colums where the author responds? Voila.

All this is to introduce a very interesting press release from Francis Hamit (right) in which he addresses critics of his novel Shenandoah Spy. I place the whole release below to provide context for the response to reviewers. Is Hamit in the zone where response is needed? Or is he in a lose/lose bargain?

Because of the economy, we continue to push "The Shenandoah Spy" and have put off the second book in the series, "Nest of Spies". That means we are still sending out review copies and doing book signings and interviews. Generally, the reviews have been excellent and the only ones that fail to be excellent are one where the reviewer has quite obviously not read the book fully and completely. When the review focuses on a very minor character and misses the main events of the narrative that define the characters, it's sort of a dead giveaway. This only seems to happen when reviewer is a historian rather than a novelist. Given how touchy these folks are about accuracy, it seems odd that they are so careless and quick to judge a historical novel based on a few selective readings of bits and pieces and not the whole. True, many historical novels are sloppy in their own research and many professional historians rightly scorn them for this Hollywood approach to the facts, but prejudging a book by its category and reading it incompletely is the kind of carelessness that professional book reviewers (if there are any left) get fired for. I used to be one.

There is not much an author can do about a badly done review, except take the hit and hope that the mass of favorable opinion will overcome it, but I do think that professional historians should recuse themselves from reviewing historical fiction if they cannot be bothered to read the complete work and understand, going in, that is is indeed fictional and creative choices related to the needs of an entertaining and enjoyable narrative for average readers, sans footnotes and other artifacts of the tradtional history are what will drive the storyline. These are not teaching tools, nor are they intended for immature or sensitive readers.

The essence of drama and fiction can be expressed in the question "What would happen if...." and fill in the blank. This takes a novelist places that a historian would never think to go. Currently I am looking once more in the exisitng primary sources for what the intelligence trade calls "indicators". Last night I discovered that the British were very worried at the end of the Civil War that America might use it's massive and experienced army to invade Canada and that British support of the Confederate Navy (almost entirely crewed by British sailors) would be the cause. The American merchantile fleet had been destroyed by the Confederate cruisers, either directly or ,more significantly by the 715 vessles that had changed their registration from American to British. The Confederate Navy was a secret service operation from beginning to end. I will be going to the Public Records Office at Kew in the future to see just whose secret service. And to Liverpool. Seems to me that there more than one PhD dissertation to be gotten here, but that's not my game, so regular historians should feel free to jump on this, if they like.

My book is available for review, but you have to read the whole thing. The attached file is the current book cover. By the way, the Amazon Shorts version is not the same. I did more research before the final publication. Mostly on Major Wheat, a very minor character, but every character in a novel is important.