"Let us have our Walmart and let us stop the battle" 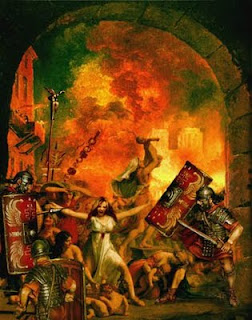 There will be a lot of blogging on the Wilderness Walmart vote, so let me get out of the way as fast as I can.

The title quote, complete from the linked story, is "I know we've been referred to as ignorant shoppers. I feel bad about that but I'll live with it. Let us have our Walmart and let us stop the battle." Let us have peace, as Grant said.

The 4-1 vote routed preservationists; humiliated them; cut down their orchards, salted their fields, carried their women and children into slavery. But the preservationists will not learn.

Heritage tourism, for instance, is a dark alliance that is all about jobs, tax revenue, and cheap shopping. The expedient alliances pursued nationally to save battlefields will turn against preservationists as surely as the council that voted in Walmart and voted out history. If there is no organic preservation scene with political roots and deep local cultural affinity, all is in peril.

The "outsiders" who swooped in here deserve some credit but we need to look at the resources wasted in this battle; the opportunity cost of wasted time, energy and treasure; the polarization of preservation around the Wilderness into us versus them; major message failure; and the fundamental truth that advocates of "jobs, tax revenue and a cheap shopping" are not natural allies of the Civil War preservationist when parading as "heritage tourism" advocates.

We had a Bull Run in the Wilderness. Will we regroup and reorganize on sounder lines? Will certain generals be relieved? Can we retrain before the next battle?