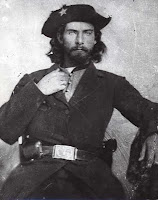 Curious news: the Daughters of Union Veterans of the Civil War appears to be dedicating a memorial to the Union victims of the Centralia massacre on Sunday. A memorial honoring the Rebels has been on the site since 2006, says the AP.

More likely, the crack journalists of the Associated Press have confused the Centralia Massacre with the Battle of Centralia days later, and perhaps mixed up the honorees.

"Confederate soldiers who died in the battle have been honored at the site since 2006," says the wire. What site? Is AP referring to this historical marker as a Confederate memorial? It's not on the battle site and it's not a memorial.

Let's disentangle some professional journalism to get nearer the truth:

(1) Union soldiers killed in the battle have been honored since 1957 by this Centralia memorial. It's in a graveyard.

(2) The Daughters are erecting a memorial to Union victims of the train/depot massacre (which triggered the battle days later).

(3) There is a battlefield info station in Centralia Park that explains the clash that followed the massacre. It is not on the battlefield.

(4) There appears to be no collective memorial to Confederate battle dead at Centralia, nor to the butchery of Bill Anderson, unless it is on private property and kept quiet.

The biggest question is where is the new monument? AP began its story: "A Civil War battlefield in central Missouri has a new monument..." Do they mean a public park is getting a new monument?

Perhaps this is misinformation from the Daughters. Why would victims of a massacre at the depot be honored on a battlefield? Especially since that battlefield land is inaccessible, not public. (Again, the battlefield marker is itself in a geographically irrelevant public park.)

Have you ever seen a story in which almost every piece of information is wrong?

Missouri readers, help us out here.