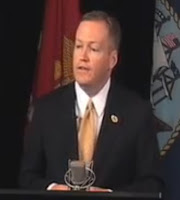 Thinking about what I wrote yesterday: as I go deeper into the immensity of War Like the Thunderbolt, it becomes plainer that there is bigger story.

This is a long book (517 pp in the advance reader's copy) sustained at the highest literary standard in which Russell Bonds maintains - despite the limits of a narrative structure - an honest historic sensibility with justice to evidence for all. There may be quibbles, and the author does like the occasional sly-and-dry dig, but he is all about getting at the facts of the matter rather than slighting evidence to pour formula down the throats of the reader.

Friends, those who read Sears while despising his dogmas, say to me they buy his books out of love for his writing. Here is a better writer with fewer dogmas. They like the vividness, the knitting together of contemporary testimony Sears offers. Here, there is more testimony, and it is fresher. They like the campaign focus in title after title combined with an epic perspective in each. Thunderbolt has this, in greater proportion here, as if matched to the broader geography encompassed in the story.

So, it seems to me possible that Sears, no longer able to deliver new works at reasonable intervals, is to be overtaken in the marketplace by one who writes better English, writes better history, and who satisfies more reader needs than those that made Sears a top-seller. I am not only comparing Bonds to Sears per Sears but more to the point, Sears as the leading popular Civil War author ... the survivor of a once popular genre. To see the (to me, close) interval between Stealing the General and Thunderbolt, and considering the quality of each work, stamina speaks out and the potential seems to be here for the first major new Civil War author in a generation publishing general works at intervals to a standard that generates (and deserves) an enthusiastic following.

This is all market talk and something of an injustice to the author's inherent merits, but I want to finish in the same vein. His many virtues we'll take up another time.

The end of Centennial dominance of ACW publishing has arrived as we knew it would. The authors have died out; among the survivors, results are meager, activity is low. Exciting new studies appear with discoveries and analysis faster than the old guard can assimilate them or discredit their authors. The pot has been heating but has not come to a boil.

My own anti-narrative biases led me to hope that the big change we long for would come not just through new content but through new forms, non-narrative forms. Grandpa would be thrown out with the bathwater. I was naive. Thunderbolt suggests that narrative will replace narrative in the same market and for the same readers, except that it will be better narrative informed by better history dealt out by an honest broker aimed respectfully at a knowing audience.

This may then be how the Centennial ends, and this therefore is no place for any petulance over historiographic form. Whomever frees us and however he gets here, we need to be free.

Thank you Russell and thank you new and future narrative historians. It will be your skill and sensibility in managing narrative that sets you above what went before.