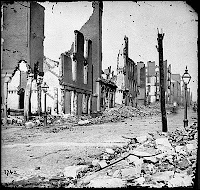 The advanced reader knows that you can get quite a good history book, in terms of research, new revelations, presentation, historic sensibility, and the thing can be completely wretched in terms of its military science.

This is a given in Civil War history where the reader must make such allowances or dial down the number of readable books to a very low total.

One of the easiest tipoffs that we are dealing with a naif is jacket copy that proclaims the decisiveness of a battle in a book covering that battle. I don't mind being argued into the position that a battle was decisive, but I cannot remember an instance where the author makes the effort. The author tends to make a few strong claims and then moves on as if case closed.

I started thinking--is there a more overused term than "decisive" for Civil War battles? You can Google the name of just about any CW battle along with "most decisive" and come up with a bunch of hits where people call a battle "the most decisive battle of the war." Often it's done, ahem, for book marketing purposes. . . .

Gettysburg? Of course. Too many to quote.

Antietam? Yep. (Castel: "probably the most decisive battle of the Civil War from a political standpoint.")

Champion Hill? Yes. (Foote, Vol. II, p. 372) ("there was fought what one western-minded historian called 'the most decisive battle of the Civil War.'")

Chickamauga? Yep. ("One of the bloodiest and most decisive campaigns of the Civil War." Cozzens)

Sabine Pass? You got it! Decisive!

It may depend on your definition of "decisive" - do you mean that it decided the strategic outcome of the campaign? (Vicksburg). Or that it was really, really lopsided? (Nashville). Or some other criteria?

We could excuse the authors if their book pitches got translated into dust jacket copy but there is generally continuity between the inside and outside.

As children, we were taught the significance of the Battle of Trenton in very precise terms: it restored the morale of the army and Congress; it enabled additional fund raising and recruiting.

The modern Civil War author by and large does not deliver that clarity. He has usually ingested, through pop culture, a deep and abiding belief in the (militarily) decisive battle and his writing is colored by this unexamined prejudice.

A second kind of error, influencing the first or standing alone, is that of making military evaluations exclusively through contemporary eyes. In this mistake, the author gives full credit to the military science and utterances of of the participants, as if history did not actually happen and we have nothing to learn from it. In Northern histories, this can take the shape of getting swept up in Lincoln's ignorant, barely intelligible opinions. In Southern histories, it can take the form of crediting Bragg's or Davis's critics.

The really useful thing to know about the Civil War is how it ended. It ended (a) because Davis could not establish a new capital and (b) because his cabinet could not get to Texas or Cuba set up a government. That puts contraints on "decisive," like it or not.

The question of decisiveness then, whenever it occurs before June 1865, is what outcome could possibly have brought our known war-ending events to occur ahead of their time.