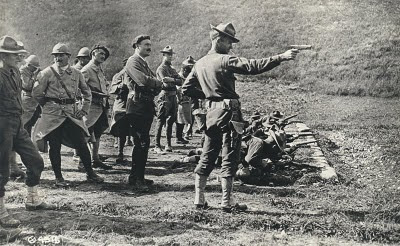 Have been immersed in infantry doctrine again for the first time in 40 years.

Civil War officers compensated for the lack of American doctrine by reading Jomini, McClellan's Delafield Report (Grant notably ordered it upon his colonelship), and Hardee's Tactics. This was not enough, for even where there are uniform, nationally approved and taught principles, consistency of views, aims, and results are difficult to obtain.

I was reminded of the fruit of American doctrinal poverty in the 1860s while reading about American infantry doctrines circa 1917. I think this little polemic about WWI era doctrine matches Civil War circumstances perfectly. It comes from a PhD dissertaion:

This helps explain something to that tourist at Antietam who asked a tour guide (was it Mannie? I forget) "Were these people [the fallen] stupid or what?"

I can help here, because I myself was stupid and instinctively prefer stupidity in all things infantry.

In this recent reading, there was a shudder that went up my spine on recognizing my own training in the 1917 material. The gist of it is, at squad or platoon level, we were taught, doughboy style, ACW style, that job one was to achieve local fire superiority by bringing more rifles on line bearing down on the opposition faster than the enemy could bring his rifle fire down upon us. This was flavored in my day by including organic weaponry beyond just rifles, but it was the same principle. It was rooted in self-reliance, the weapons at hand, and any "easy access" auxiliary firepower that might be not too difficult to arrange; hence, the pervasiveness of this simplicity in the ACW, WWI, and Vietnam.

The imperative of (organic) firepower superiority is like a building block upon which other edifices can be built. It is linear. It is limited.

If the training and doctrine do not go far enough, then the basic doctrine of fire superiority is all that infantry is left with. They will be "stupid or what."

The human element, too is worth mentioning. I joined the Army to avoid the technical services (USAF, Navy). I joined the infantry to avoid the technical branches (artillery, armor, signal, etc.). My ideal was leg infantry and I was deeply annoyed at being assigned to a mechanized unit. Hated radios, codebooks, motor pools, etc. This is the human factor in infantry. We were, as a friend put it, "a proud but simple people."

I read about these kids calling in air strikes on snipers a block away and cannot relate. They call on surgically applied artillery: no part of my world. Drone aircraft: you're joking? "Force protection" - what the hell is that?

Mine was the stupid infantry, which helps me with my ACW reading. I feel an affinity.