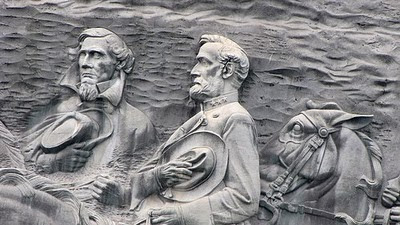 Let's refer again to the transition in command at Seven Pines and ponder what we are reading:

About 1:30 pm. [June 1st] President Davis rode up and asked for General Lee. On being told that I [G.W. Smith, commanding the battle] had not seen General Lee during the day, the President expressed so much surprise that I asked him if he had any special reason for supposing General Lee would be there. To this he replied ; Yes; and added that early in the morning he had ordered General Lee to take command of the army at once. [...] General Lee arrived at about 2:00 p.m. and at once took command of the army.

If you are familiar with Seven Pines (in other words Fair Oaks from the viewpoint of the Southern commanders), day one (5/31/62) features Davis and Lee riding about the battlefield trying to get information plus Lee also waiting at Johnston's HQ to learn what he was doing, while Johnston avoided the pair of them with complete success.

From Davis's and Lee's POV, the battle must have seemed a muddle, the commander not to be found, no one sure of the plan, no communication. Smith - Johnston's second in command - was at HQ also long out of touch with his commander.

It's not clear to me where in this sequence to put "Davis learns Johnston is incapacitated." Smith says Davis told him the Lee appointment was "early" on the 1st of June. Meanwhile, Lee writes Smith a letter approving the battle plan for the 1st, dates it the 1st, and nothing in the letter conveys his new status as commander of Smith's army.

You see that I give Lee the benefit of the doubt that he wrote Smith the approving letter BEFORE Davis put him in command. If Lee had written the letter AFTER appointment without reference to the new relationship it would have been a very dishonest distancing act.

There was, nevertheless, a distancing act.

Davis is shocked by Lee's absence from the battlefield as late as 1:30 p.m. on the 1st. When Lee appeared at 2:00 in the afternoon and "took command," he did not issue any orders, deferring to Smith. When Lee and Smith encounter Longstreet between 5:00 p.m. and 6:00 p.m. on the 1st, Lee lets Longstreet report to Smith, offending Smith's sense of order to the point where Smith orders Longstreet to report to Lee.

It's easy to see what Lee is up to: he is letting the battle play out without him, without putting his name on it. The question is why?

Again, I have some possibilities:

(1) Lee sensed the battle was a mess, whether or not Smith's plans were good. He did not want to own it.

(2) Lee rated Smith's chances of retrieving the battle on day two higher than his own.

(3) Lee rejected the command structure but could not reasonably change it until after the battle; he did not want to fight a battle with Johnston's (now Smith's) commanders and dispositions.

(4) Lee did not understand Davis's intent and imagined he had more latitude in the timing of his assumption of command than he actually had.

(5) Lee spent the morning getting lost, or falling asleep, or enmeshed in some confusion or foul-up.

More on (6) in another post. Note that Johnston, as commander of the Army of the Potomac, wrote Davis in late 1861 that he could not release Smith from his organization because as his number two, Smith was the operational commander of the army.

Whatever Lee's motives, Smith seems to be our sole source for a detailed description of the change of command, and in Smith's account, Lee's absence was unexcused.

For a different view, see Mort Kunstler's account of the command change here.