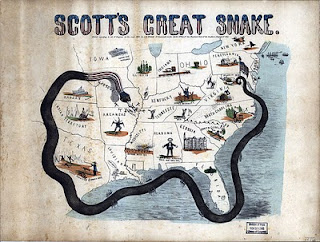 The simplest matters in Civil War history are obscured. How was McClellan commissioned? How did Lee come to command the Army of the Potomac? When was Pope relieved of the Army of Virginia?

There is a miasma surrounding so much in ACW history and at the same time such a high demand for authoritative narrative that the result is a kind of compressed representation of knowledge. To go back to Baudrillard, we are fed symbols, simulations that do duty in lieu of underlying facts (whose reality is unknown to the general reader). Let me call these “tokens,” which is shorter than “pop history’s wooden nickels.”

“The Anaconda Plan” is this type of symbol – a representation of something that is not but which is agreed upon as a necessary fiction to advance the narrative. Hitchcock called certain story elements “Maguffins,” creations that served no intrinsic purpose but to advance the plot. The Anaconda advances the plot.

The tale of the Union’s Civil War needs an early war strategy. If there is one, it can then pass through a character-like arc: it can fail; be revived; triumph. Or it can provide literary continuity through reference to its elements at different points in the chronology. Or it can pour a nice draft of “what-if” into the reader’s cup.

To find a strategy, we must find something simple enough for the laziest, most ill-informed reader to understand. A military plan per se would be to complex, with too many moving parts: motives, means, ends, actionability. What we need instead are some thought experiments, notions sketched in letters, exploratory “high concepts” with nothing to them except the power to excite the reader’s imagination. This is good token material. This is “the Anaconda Plan.”

“Plan” and “strategy” are military words with common meanings, just as some medical jargon has common meanings. Reading a medical history, we don’t want to see “fever,” “psycho,” etc., used in a street sense; and yet Civil War history is rife with references to “strategy” and “plans” in the same sense that I have a “strategy” or “plan” to stop off for milk on the way home from work. This too is the “Anaconda Plan.”

The “Anaconda Plan” is less egregious than many other Civil War tokens, but it is misleading and annoying and worth exploring further .