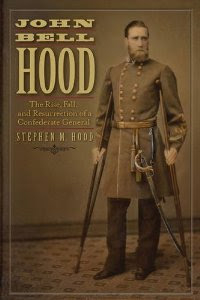 My Amazon Review:  JOHN BELL HOOD: The Rise, Fall, and Resurrection of a Confederate General

This is a book that examines that series of claims made about Gen. Hood which define him in modern pop history. Author Hood's system is to lay out a representative assertion, examine its sources and then allow the reader to decide if the "common wisdom" has merit. The demolition of Wiley Sword and his ilk is awe-inspiring and I hope it puts the fear of God into that great careless pack of out-of-control nonfiction writers who dominate best-seller lists. They will be held to account somewhere, sometime.

Gen. Hood's haters might reasonably argue that author Sam Hood is weaker in dealing with interpretations than in outright claims. Since outright claims make the bulk of the brief against the general, rebutting interpretations is not a major part of the book. Author Hood also spends more time on Gen. Johnston's military record than is directly relevant to the project at hand. Fault noted, but some of his anti-Johnston material is quite interesting.

Despite these quibbles, this is a choice piece of historiography that applies a little shock to those who think they know John Bell Hood and his last campaigns. We need more of this across the board. No one who has read or collected Atlanta or Nashville campaign books should do without this.

A book that begins with this quote from Cicero is one that you know is way out of step with Civil War history:


The first law of the historian is that he shall never dare to utter an untruth. The second is that he shall suppress nothing that is true. Moreover, there shall be no suspicion of partiality in his writing, or of malice.

Take away partiality, malice and suppression, and we don't have much ACW history left.

Speaking of which, I am partial to Sam Hood and this work for reasons obvious to those who have read me over time. In 1997, I began compiling and publishing examinations of the claims made against McClellan. My motivation was rage. Having binged on ACW pop history 1994-1997 after 30 years of reading good European history, I found ACW standards so primitive, so insulting, so outlandish as to require outrage.

Author Hood comes at this from a saner, gentler place. His interest in the ACW starts as a kinsman of the general, one with access to troves of family documents that historians have never seen. The emotion apparently came later, in encountering a uniform depiction of the general (in recent times) in a paint-by-the-numbers way in colors of spite, contempt, and ignorance.

In my readings, the treatments of McClellan (and other "unsuccessful" generals, including Fremont, Johnston, Hood, etc.) were a red flag signalling disaster within the whole genre. Revisionist authors did not get this. Steve Newton made a compelling case for the revaluation of Johnston's Richmond defense while resorting to every pop history cliche available to contextualize the rest of his story. The critical eye, his own and other revisionists', was reserved for a chosen subject and averted from the general malaise. By the same token, the many regimental and tactical level works that came out in the late '90s that overturned common knowledge were accompanied by authorial rationales and apologies where discoveries did not fit the master narrative. Let us also not forget all the authors who continue to choose to argue revision of a discrete point: that this one conclusion needs to be fixed in order for the glorious whole to be perfect. (Examples abound in previous posts - no need to recount them here.)

This is not what Sam Hood does. This is one of those rare revisions that clearly recognizes Civil War history itself is broken. At the same time (unlike this blog), author Hood does not use a particular element (Gen. Hood) to organize a lengthy general indictment of the field. The indictment is incidental to his main task, repudiation of bad work about the general. But the big picture is there and he does not skirt the issue. Witness:


Unfortunately, by the middle of the twentieth century, the second and third generation Civil War books came to rely more and more on the opinions and facts (often biased and erroneous) of earlier authors rather than simply the historical record written by the men and women who lived it.

This phenomenon is part of what I have called Centennialism and Thomas Rowland has called it Unionism.

2. Making a factual statement and providing a source that has no relationship whatsoever to the "factual" statement;

4. Inaccurately paraphrasing or distorting the context of a primary source;

We can add to that list selective sourcing, overweighting sources, discounting sources, ignoring sources, and most toxic, failing to engage critics of your interpretations.

I have been dwelling on the broader points here without adequately conveying how much excitement there is in
author Hood's specific takedowns of weak claims and garbage citations. I don't know how Hood authors will be able to appear in public after this (but perhaps I underestimate the shamelessness of Civil War authors). If you enjoy the pointed historiographic criticism appearing occasionally in this blog, this book is for you. Here General Hood has been done a service as has ACW history.

p.s. Anticipating that critics might call his book "unbalanced," the author suggests that the entire field has tilted one way and that this book is the balance.

Those who wish to post their own pop history opinions on my blog likewise suggest this blog is unbalanced. They need to understand Hood's point: this is the balance.