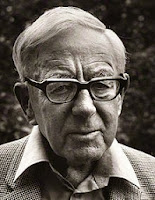 That is the epitaph of a public intellectual, not of an historian.