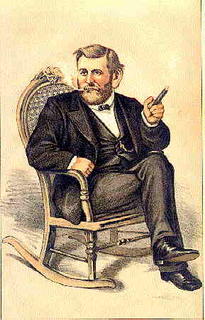 Time for some do it yourself trend analysis.

So the number in parentheses is "soft," very soft, and I take some license in referring to it as if it reflects total sales for a book. But it's the best I can currently do.

What can we conclude from these figures? Read on and I'll meet you at the bottom of the post.

Got your impressions lined up? Here are mine.

First, I'm struck by the number of Grant titles in play at the major houses. The biggies tend to pick and choose their ACW risks carefully, maintaining fairly low Civil War stock from season to season. I wonder how they could all be running the same product, more or less, at the same time and have come up with this story.

My sense is that there was a marketing vibe in publisherland that the time had come for another big-selling Grant book, post-McFeely. Jean Smith's book was a testing of those waters, Smith being a proven pop-historian of the Ambrose/Goodwin type (but with lower sales).

With the commercial failure of Smith's book, it was decided to try again; in one case by Smith's own editor, Michael Korda; in Josiah Bunting's case, he was solicited to do a major Grant reassessment by no less than Ted Sorenson. As a prelude to these effots, McFeely imitated McPherson in issuing a picture book version of his own Pulitzer-winning work. McFeely's foray into coffe-table fare failed (his picturebook numbers are dismal). Meanwhile, the maverick trade shop Regnery sent its own probe forth early in '04 in the form of the utterly obscure Edwin Bonekemper's Victor, not a Butcher.

Bonekemper's book achieved near success for Regnery, given Regnery's scale of production (10,000 sales would have probably sold out the print run, though it is possible the press ran fewer copies than that). It's possible this goaded on the big houses.

It certainly drained off some of their sales; nobody needs three books by three non-specialists saying Grant was a victor not a butcher. So, I think that the potential Grant fan-base got tired out by the end of last year. Look at the "decay rates" on 2005 sales. Those are mid-year figures, so double them and you see - barring a Christmas surprise - no sales approaching 2004 levels.

The sales figures you see are inadequate by trade house standards, across the board. Are they bad enough to put a long chill on future Grant books? Probably in the trade arena; I'm not sure if the university presses will be scared off, however.

(For more on calculating sales numbers, see here and here.)