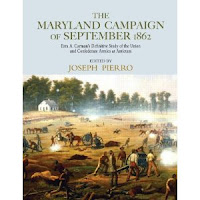 There are now two editions of Ezra Carman's study of the Maryland Campaign after years with none.

By way of introduction, here are a few glittering generalities.

Joseph Pierro's work came out earlier. It is in one volume, which I find handy, but the size is a little unhandy at 11.1 x 8.4 inches and the type size is one point too small for geezers. There are no photos or maps. The footnotes are minimal (but not too stingy), source-oriented (tracking some of Carman's sources) or strictly informational. Pierro seems to have defined his role mainly as transcriber of the notes and clarifier of the odd reference or quote - in other words as a restrained or even minimalist editor making himself useful to the reader/researcher on the edges of that major effort, transcribing and delivering a famous source document. 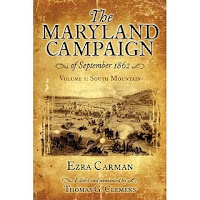 Thomas Clemens' work is out last month and is in two volumes (the first just now), which with Amazon's discounts, will still be cheaper than Joseph Pierro's somewhat expensive edition, discount matched against discount. Two volumes are less handy, however, than Pierro's singleton. The trade HB size of 6x9 is more comfortable; the type size is roughly the same as in the Pierro's work but there is a smidge more leading which makes reading somewhat easier. There are photos, including many of the battlefields, and some attractive, fascinating maps. Clemens took up the transcription burden, as did Pierro, but is richer in his notes. He gives slightly more sources for obscure Carman quotes and statements; he corrects errors made by Carman; he points out authorial self-contradictions; and he even pauses occasionally to argue with the author, which I dislike in principle but appreciate in these specific cases.

A word on Carman, and this is unfairly broad but conveys my sense: Carman's perspective was that of an active, committed Republican veteran who happened to appreciate McClellan.

He processed Republican editorial pages of the war into a framework that could hold his research together in a narrative - it's a framework that still informs our basic understanding of the Maryland Campaign and Antietam.

Further, he has been so relied on by historians that his views are already fully assimilated into our current "understanding." The sole surprises Carman may deliver involve his mitigations and rationalizations of standard issue Republican damnations of GBM. (That may be no fun for you, but it intrigues me.)

In sum, Carman may not surprise much and the book buyer may feel he has been left with the picked over bones of a Thanksgiving dinner instead of a rich feast.

This is where Clemens (right) comes in. Where Pierro is the editor as deliverer of archival material, Clemens is the editor-as-critic. In my view, the unique familiarity we readers already posess with the content of Carman's manuscript puts Pierro's approach at a disadvantage. We need a full, historiographic critique to accompany the publishing of Carman's famous manuscript.

BTW, where Joseph Pierro has a dust jacket showing establishment blurbs (hello again McPherson, Davis, Bearss, Wert), Clemens has blurbs from the cool kids: Hartwig, Hoptak, Petruzzi, Rafuse. He is in fact a very cool kid himself. He comes to Carman with "attitude." We need that here.

The drawback to Clemens' Carman is not that he intrudes upon the material but that he does not intrude enough. It's not that his notes and comments are too many but that we want much more. Pierro has delivered us the manuscript; from Clemens we want more commentary than is supplied.

An alternative division of labor might even have been, Pierro = manuscript in book form; Clemens = commentaries in book form.

For my taste then, Clemens' edition is the edition that I want, despite some frustration.

Examples and details next installment.