General David Petraeus was in the news in mid-month when he fainted during a CCW-type of hearing.

The thin, youthful-looking general is a documented fitness buff, doing multiple runs per day and other strenuous exercise. (Bumper sticker seen on the car of a marathon runner today: "My sport is punishment in your sport.")

General Petraeus will be 58 in November. General Mansfield was 58 when he was killed in battle. Mansfield, shown right, had not fainted up to that point, at least not on the record. He is the oldest looking general I have ever seen. 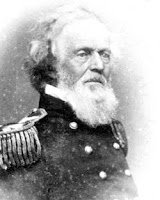 Petraeus and Mansfield. One slogs around all day in Maryland or Virginia mud, heat, and frost in heavy boots and wool clothing as a kind of daily fitness program; the other mans a desk in Floridian air conditioned comfort between inspections, briefings, and rounds of self-imposed exercise.

None of this is intended to slight Petraeus but to make the point that one can run, jump, exercise, whatever, and it will not change that one is 58 years old. Fainting or worse are possible. Forget about 60 being the new 40. Mansfield was remarkable - exceptional - and no basis for broad army policy.

Joe Hooker was our fainingest ACW general but his faints were accompanied by blood loss and concussion. Remember how you thought he was a geezer in the summer of 1862 at 47 years of age? That's 11 years younger than Petraeus, 11 years older than McClellan.

And speaking of older generals, how old do you make Lee in the summer of 1862? He was 55, three years younger than Petraeus. Lee - another exception and no basis for policy.

In J.F.C. Fuller's book Generalship: Its Diseases and Their Cure, he names three pillars of generalship: courage, creative intelligence, and physical fitness and he attributes all three to "the attributes of youth rather than middle age." He does not find courage and creative intelligence among middle aged officers as a rule, and he would be dismayed at the current leadership of the U.S. military.

If we look at the ages of Union field generals that we once considered "old," a comparison is interesting (all summer of 1862):

On the Rebel side:

The Chairman of the Joint Chiefs of Staff, Mike Mullen, turns 64 in October. Army Chief of Staff Casey is 62 next month.

BTW, General George Washington wrapped up his war at Yorktown at the ripe old age of 49.

Old Union generals: now think of the oldest you can.

Scott was 75 before retirement. He got out of the way relatively fast. Mullen is not going to reach that standard, fortunately, nor John Wool's 77 (in the summer of 1861). Wool stayed around and, as Beatie shows in livid colors, spent the spring and summer of 1862 old man style scheming and fussing at McClellan.

Mullen is the age of Edwin Vose Sumner in '62. Whatever you think of Sumner now, your first reaction to him was that he was a freak of circumstances from whom little might be expected.

Mullen is a year older than the sedentary John Dix was in summer, 1862. Dix was valued as a political general who also commanded volatile military jurisdictions (Baltimore, New York). He was an exception by definition.

Fuller made allowances for age in peacetime leadership, suggesting some sort of organized transition to young generals in time of war. If that were even feasible, it could not happen because at the highest levels, this modern army leadership will never willingly leave peacetime cultural norms.

Fuller: "In war, it is almost impossible to exaggerate the evil effects of age upon generalship, and through generalship on the spirit of the army."

(Petraeus picture from an unidentified UK newspaper. They give out fewer medals there and seem intrigued by ours.)