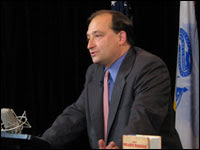 Like most of you, I browse a book starting with the notes, evaluating sources. Donald Stoker's sources surprised me in The Grand Design. He's an industrious citer and that makes for a high level of reader discomfort as I'll explain shortly.

In the blogosphere we deal with the problem of underlying sources through the hat tip. "Hey, have you seen this story?" (Hat tip to secondary source here.)

Donald Stoker's problem is the opposite; conscientious citation, well done in the narrative, with a thorough loyalty to secondary sources.

Many of the secondary sources make sense. He opens the book with Lincoln's departure from Springfield recapitulated from Shelby Foote and cites Foote. Well, okay, if you're going to do that but it's not Randall of Donald. The first three chapters of the book are also littered - densely - with all sorts of non-negotiable, imperious summations: :...none could see beyond their theatre," "Their education had not prepared Civil War officers to think strategically." This kind of sewer water is consistently cited to the secondary source through whose pen it first flowed. The author is saying, "I believe this too and here's where I got it from." Good. But there's too much of it by far.

Now, when we get into citing issues of facts, events, we do well to follow Sherman Kent's advice to Yale history students of yore: don't cite known or easily checked facts, cite little known or controversial ones. Stoker does not follow this rule and in attributing certain known facts, it is disconcerting to find these given as secondary sources in in the first three (set up) chapters.

For instance, McClellan dividing the western departments between Halleck and Buell - an unnecessary citation anyway - is credited to T. Harry Williams! Here is the entire passage being noted:

McClellan answered with reorganization. He broke the Western Theatre into two departments, placing the Deaprtment of the West under Henry Wager Halleck. The new Department of the Ohio went to Don Carlos Buell.

What was/is the author thinking?

Getting away from the background material starting with chapter four there is a blossoming of primary citations with secondary sources becoming rare. The fault here is perhaps overkill. I believe every single quote is cited and whatever else the author deems to be factual. Having adopted an overkill position on citations for the meat of his book, Stoker probably decided to apply the same draconian rule to the soft underbelly of his first three analytic chapters.

Or is this possible: that Stoker does not know what is important or not, what is interesting or not, what is controversial or not? Is it possible that Stoker is a relative newby to the field who came by everything he knows through McPherson, Williams, Catton, etc., and that he plunged into primary sources from their launching pads.

There are surprising gaps in both his knowledge and the sources given.

This does not appear to me to be the action of a man in command of his material.

And speaking of references, a comical ignorance of or flippancy towards primary sources is on display in referring to Sears' published book of McClellan's wartime correspondence as "McClellan Papers" throughout. The McClellan Papers are stored at the Library of Congress. Sears' book could better be tagged "Wartime Correspondence" or some such.

There is also the matter of strength estimates, which are presented as specific numbers with an insouciance that is maddening. At the battle of Grand Gulf, "They [Rebels] numbered about 6,000. Grant had 23,000 and more coming..." This throwaway line is attributed to Bruce Catton! In the dense thicket of primary sources given in later chapters, secondary sources are revived to give battle strengths with lots of zeroes! (Nor are these secondary sources Fox or Livermore.)

The early chapters of the Grand Design tell us we are in for a rough ride, generous helpings of bombast, a dated and irrelevant narrative framework and more conclusions than Carter has liver pills, to coin a phrase.

Maybe it will be worth going through, nonetheless.