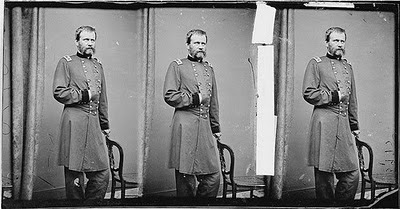 At the very end of President Buchanan's term, Montgomery Meigs made a political effort to have William Franklin replaced by himself as engineer for the Capitol dome. Meigs succeeded and Franklin was moved to oversee Treasury Department construction. This completed a cycle in which Franklin had earlier replaced Meigs.

Franklin's political lineage begins with his recommendation to West Point by neighbor (and Congressman) James Buchanan. He had a high level of political visibility working on the dome during the Buchanan Administration but seems not to have been at all politically active.

With the departure of Buchanan from government, Franklin seamlessly acquired a new, more active patron and collaborator in Treasury Secretary Salmon Chase. Franklin was always at hand while supervising construction at Treasury and in his vast assumption of military responsibility, Chase needed germane advice.

In his biography of Franklin, Mark Snell paraphrases our old friend Timothy Reese: "...within days after Sumter's capitulation, President Lincoln personally appointed the three man committee ... Lorenzo Thomas, Major McDowell, and Captain Franklin." This committee was to design a "new organizational structure" for the army. Lincoln put Chase in charge of this matter. This is the formal beginning of McDowell-Franklin, which would in no way be limited by a single task or charter.

Lincoln's patented outside-the-chain-of-command shenanigans appear here to be on full display and are worth a couple of quick remarks. Recall that the War Department was divided by Calhoun's reforms between an operational side, headed by the senior general, and a bureau side, headed by individual bureau chiefs. Army organizational design is here a bureau matter and by putting Lorenzo Thomas in the mix, Lincoln ratifies that publicly. Rather than another example of Lincoln's anarchy, this is a piece of good order, except for Chase's involvement. The anarchy follows the order, however, when Thomas absents himself from most or all of the meetings and when McDowell-Franklin becomes an operational planning center used by Salmon Chase for all sorts of activity "owned" by Winfield Scott.

There is a sketch of McDowell in Whitelaw Reid's Ohio in the War that includes a summary of the full-bore chaos in a nutshell. Where it says "McDowell" or "the major," substitute McDowell-Franklin:

The major was consulted about almost everything - about the calls for troops, the assignment of regular officers, the number of generals needed for the new troops, the organization, pay - in a word, about the multifarious details of a complex military organization ...McDowell had for a time, perhaps, the most potent influence exercised by any of our military men.

Reid unconvincingly states that McDowell had the full support of Scott in this. This is true only insofar as the orderly appointments go, such as Lincoln's committee. Scott was a stickler for good order, chain of command, frequent communication from his subordinates as to what was going on, and acting within charter. In the wildly informal hurly-burly of the Lincoln Administration, McDowell, in his ever-shifting activities, should have been sending a stream of updates back to Scott and/or Cameron. There are none in the record and their possible existence is not hinted at by what is in the record.

McDowell-Franklin was a rogue unit taking on ad hoc assignments that belonged in military channels. It was an extra-legal, extra-military action team under the control of Salmon Chase occasionally consulted by Abraham Lincoln. McDowell-Franklin prototyped the long-term bypassing of General Scott and the Secretary of War in planning and executing military projects. If the secret plan to relieve Fort Pickens was the one-off prototype for this kind of subversion, McDowell-Franklin offered an institutional model.

Of McDowell's political origins we have written earlier. In sum, he was the relative of Republican Ohio Gov. Dennison, who wanted him to command Ohio's troops; he was a known Republican abolitionist; he was sought out by Chase from the moment of Chase's arrival in DC (Reid says); his general's rank was made by Chase. He was also a member in good standing of Scott's staff, unlike Erasmus Keyes who had fallen afoul of the old general.

Scott was a deeply committed Whig who surrounded himself with Whig or Republican officers like McDowell and Keyes. According to Reid, McDowell served on Scott's staff from 49-51, 53-56, 57-58, 59-60, again in 60, and in the War Department under Scott in 1861 until the time of McDowell's army command in Scott's second coordinated offensive. Scott, bypassed, showed a higher tolerance for the McDowell-Franklin circumventions than for McClellan's.

We come now to the question of the larger picture, the political context.

Lincoln, for reasons I do not understand, assembled a cabinet hostile to William Seward. Let's put that another way: his cabinet displayed the very odd characteristic of having no politicians (except Cameron) who benefitted from the money or support of the Seward-Weed machine and it included people hostile to Seward such as Blair and Chase. You have heard it said that Seward aspired to be chief of cabinet. This aspiration could not have survived the period of cabinet appointments when the writing appeared on the wall of Seward's future influence.

Gideon Welles recounts Montgomery Blair's assertion that Cameron owed his place in the Cabinet to Seward's intrigues and that shortly after appointment, Cameron switched allegiance to Seward's archenemy Chase. This would explain Cameron's willingly sharing workload with Treasury.

McDowell-Franklin represents the creation of an alternative military center outside of Seward's influence. The War Department bureaus are under divided influence: Chase's friend Cameron formally controls them but Seward indirectly controls them through military patronage. On the operations side, Seward's protege Scott formally controls military movements but Chase has set up an alternative to Scott, the McDowell-Franklin team to propose and eventually control movements. It is serves political ends through military work.