And so, in 1861 the McDowell-Franklin skunkworks died from the natural cause of being integrated into the chain of command to execute orders lawfully issued by appointed superiors.

Lincoln's revival of McDowell-Franklin in January 1862 did not recall to council two individual advisors but rather the old team to work as it had worked previously.

Confronted with this pair in a high profile 1862 setting, the conventional historian, deeply polluted with late war biases, either passes over them in baffled silence or pawns them off as random military experts with bit roles in a political crisis. McPherson, in Tried by War, embodies this confusion and aversion when he refers to them as an unlikely duo to sit on a war council.

To those without a grasp of the early war, or Lincoln's management style, they appear unlikely indeed. By now, the reader of this blog should see them as the most likely of all to be invited to into conference after their replacement (GBM) falls ill.

The details of how GBM supplanted them functionally, how he implemented McDowell-Franklin 2.0 must be saved for later. McDowell-Franklin's revival in January '62 was Lincoln's rebooting of serviceable 1.0 software.

Consider the full spectrum of assignments given them in January. These offer a cameo of the team in harness (from Snell):

(1) They are asked in an ad hoc Council of War to describe their favored concept of operations for the eastern Virginia theatre.

(2) They are tasked with meeting bureau chiefs to determine the timing and feasibility of AoP movement on different lines and then report back.

(3) They conduct this research out of offices in the Treasury building!

(4) They return to the Council of War and read a white paper they jointly prepared. They present a joint conclusion: for immediate movement, the land offensive via Manassas is more feasible than a water movement. Blair strenuously objects and...

(5) Lincoln sends them to the bureaus to research water transport.

(6) They present their research jointly to an ad hoc group including cabinet members.

(7) They then present their views and research to a Cabinet meeting that includes McClellan. 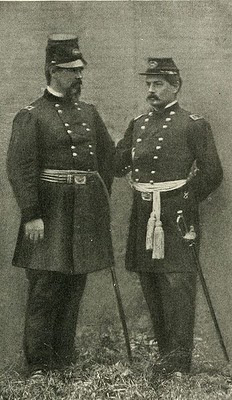 McClellan reasserts control, puts paid to their plans, and McDowell and Franklin return to their camps.

McDowell-Franklin was not intended to be a replacement for the general-in-chief (Lincoln was then acting as such); it was again a planning unit under civilian control (this time Lincoln, not Chase) rendering specially directed staff support.

Speculating, I think that without GBM's intervention this would have ended up as did Scott's second coordinated offensive, with McDowell in command of an army advancing on Manassas Junction according to a detailed plan developed by McDowell and Franklin.

(Worth noting: there is on record about this time, Lincoln's idea of having the AoP in front of Washington fixing the enemy while a mobile column, following the line of the Potomac, decamps into the enemy's rear to fight the decisive battle. IIRC, McPherson mentions it in Tried by War. Recall that in Scott's second coordinated offensive, he directed Patterson to implement this scheme after Patterson's regiments began standing down. McPherson credits Lincoln with this operational concept, but the credit is all Scott's, as seen in the series posted here late last year.)

The fascinating thing about McDowell's and Franklin's accounts of this episode is the twinge of propriety that runs through them. This team got religion in 1861 out there in the camps! After their '62 recall by Lincoln, Franklin questions McDowell about their bypassing the general-in-chief, that is, doing to McClellan as they had done to Scott. McDowell troubles himself to give a legalistic rationale but later loses his nerve when presenting to McClellan in cabinet, returning to Franklin's question with self-conscious rigamarole on how such a delicate situation came to be.

McClellan's suppression of McDowell-Franklin redux also marks the political end to his own superior implementation of the Franklin-McDowell paradigm. January 1862 marks the demise of both McDowell-Franklin 1.0 and 2.0. Lincoln here starts to search out 3.0.

But this gets us ahead of the story. We need to see how McClellan improved on the model in the summer of 1861.

With your indulgence, we'll work backwards to that point by first examining the timeline of Lincoln's bottom-out-of-the-tub crisis of January 1862.

(McDowell and McClellan are shown topside in '62; at this point, Hitchcock is being groomed for a third iteration of McDowell-Franklin)