Notes on McDowell-Franklin from Whitelaw Reid 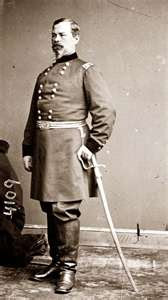 The closest thing to a military McDowell bio that we have, to the infinite shame of Civil War history, is the extended essay found in Whitelaw Reid's Ohio in the Civil War. This is a sourcebook to many (myself, obviously, and others) but it lacks detailed notes on sources; McDowell's kinship to Governor Dennison is stated as a given, for example, and some of the sources cited are unknown to us. Take this excerpt from a letter to Dennison by McDowell written on 14 May 1861 (according to Reid):

If I am placed in any reasonable position here, I wish you would write to your friend the Postmaster-General - whom I know but slightly - of the friendship you bear me, that I may also look to him for the support of anyone leading a body of raw men into a hostile State, with an excited country, expecting some positive and immediate success, must daily need [sic].

Have you seen that one before? If the Centennialist allowed it the light of day, he'd have to park his bullet train of a narrative in order to play whack-a-mole in front of a distracted and uncomforatble ridership: Why wasn't Lincoln's support good enough for a general? What has the postmaster to do with military operations? Why is a general seeking help from a governor and cabinet member? Isn't this playing politics? Reid rationalizes:

It is evident that at the very outset the General was placed in the false position of having to look to civil officers, rather than to his military superior, for support.

This lame rationale captures McDowell-Franklin in a nutshell. Note the tautology, though. McDowell-Franklin are looking to civil officers for support against their military superiors while they execute the plans and directives of ad hoc civilian leadership bent on bypassing the same military leadership. Reid paints the McDowell-Scott relationship in lurid colors that today's historians have washed away: "It was understood that the promotion [McDowell to general] was secured by the Cabinet." "It excited the displeasure ... aroused the hostility of Winfield Scott." "For General Scott, hostile originally to McDowell's promotion, was now found to be hostile to his assignment to duty in Virginia..." Reid gives an account of one of the ugly cat-and-mouse games McDowell and Scott play:

At first he [Scott] proposed to leave the occupation of the Virginia side to a volunteer officer whom he wanted to get out of Washington. The [War] Department told him he must send over a regular - either Mansfield of McDowell. Then, wishing to keep Mansfield in the city, he named McDowell, but made secret efforts to thwart the wishes of the Department by inducing him to prefer a personal request not to be sent across the Potomac. Twice he [Scott] sent his aide de camp and military secretary to McDowell, urging him to make this request. The young general was not blind to the consequences of again arousing the displeasure of his chief, but he recoiled ... from the proposition.

There is much more here on Scott's retaliations and withholdings vice the Virginia advance but we don't need that material to understand that this clandestine struggle began with Chase's formation of the McDowell-Franklin unit and it continued through McDowell's relief. This following summary nicely sets up the hornet's nest McClellan walked into:

The baleful effects of the anger thus aroused were destined long to oppress the country. In three or four ways [on the promotion and Virginia matter], General Scott had been overruled and disappointed. [...] He yielded indeed to the authority of the Cabinet, which settled every one of those questions over his head; but he yielded with bad grace, and petulantly threw obstacles in the way of operations he could not forbid.