The Dennison-McClellan partnership is unintelligible to many without a contextual timeline. Here, I have interleaved milestones in their rich collaboration with related events in the broader struggle between the governors and Lincoln.

Dennison has his McClellan and New York's Gov. Morgan had his John Wool; as the governors initiate ever more military activity through McClellan and Wool, the Administration resorts to bold strokes to regain control.

As the Morgan-Wool-Dix project sputters out under this and other pressures, Dennison, with Pennsylvania's Curtin and the Western governors, rides McClellan from one success after another, culminating in the creation of West Virginia, a result not desired by the Administration.

McClellan's promotion to major general, U.S. Army, then divides his loyalties, subordinating his connection to Dennison. As a final stroke that disables the right arm of the war governors, McClellan is brought east and Dennison loses his irreplaceable military collaborator without the ability to create or sponsor a new one. This move precedes a similar stripping of Wool from Morgan. 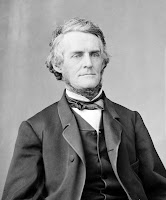 April 18 – GBM writes Ohio’s governor that GBM advised Ohio’s ranking militia general that he should withhold a few companies raised for Federal service in Cincinnati to secure it; he tells the governor that thus, “the available power of the state [will be] left free to act in other quarters.” McClellan is perhaps envisaging a war waged by Ohio.

April 23 – GBM accepts offer of the rank of MG, Ohio Volunteers from Dennison. (At his point in the war, state governors are appointing men to these non-militia general ranks)

McClellan offers to resign his position in favor of McDowell if Dennison wants – he has just learned of his Pennsylvania commission.

April 27th – On behalf of New York’s Union Defense Committee, John Dix, an organizer, approves a Kentucky request for arms and their shipment to Louisville.

Dennison’s emissary to Washington writes that Cameron is pleased with Dennison’s appointment of GBM.

Cameron writes to say regiments in excess of the Ohio quota cannot be received.

April 28 – Dennison's agent in Pennsylvania reports that Curtin is for “strong work” and he will accompany Curtin to Washington to press their joint case.

McClellan features in the exchanges. Dennison asks Morgan send a confidential agent to the meetings if he cannot attend. GBM writes Patterson that he has not a single regiment ready for field duty - Patterson has asked for Ohio troops.

April 29 – A delegate from New York’s Union Defense Committee returns from Washington reporting that “The Administration were evidently chagrined, and General Scott discontented, by the extent of the authority assumed and exercised by General Wool.”

April 30 – Letter sent to Dennison by T.L. Crittenden on behalf of Magoffin asks Dennison and Morton to arrange a truce between federal government and seceded states.

May 1 – Dennison’s agent reports from Washington that he learned from Chase “no [military] plan had yet been adopted, that the [Dennison/Curtin] plan he brought would probably not be adopted unless there was pressure, that there was much inertia in Washington to overcome…” He notes a rumor that “there had been a proposition from New York to organize a committee of safety to take possession of the federal government.”
(Some quotes are summaries posted at http://www.ohiohistory.org/onlinedoc/civilwar/sa0147/01a_1.cfm)

May 3 – Military conference for governors outside of New England is convened by Dennison in Cleveland. Present in person are Morton (IN), Curtin (PA), Randall (WI), and Blair (MI) with agents representing Morgan (NY) and Yates (IL); all meet with MG McClellan who is part of the conference. Agreed: Lincoln must supply “more men, more efficiency, more enthusiasm, and a concrete plan of campaign” (paraphrase from Hesseltine’s Lincoln and the War Governors). Randall designated to present governors’ demands to Lincoln personally. Cleveland crowds fired up by governors, call on McClellan for speech.

New York’s Union Defense Committee forwards to Lincoln’s War department its compiled report on the number of troops mustered into federal service in each of the loyal states, information not available in Washington. Thirteen governors responded to Committee queries within 24 hours.

Lincoln issues proclamation for more troops, including three-year men. Lincoln nationalizes the appointment of generals, reducing the terms of state appointed generals to the three-month period of soldier enlistments; this is the basis on which Patterson’s commission expires before the end of Scott's second coordinated offensive.

GBM is appointed to federal command – the Department of the Ohio. Ten days later, he has still not received the order.

May 5 – Chase writes Dennison that he is doing all he can to get Dennison arms. Also “that he tried to persuade Scott of the wisdom in taking possession of Alexandria and then advancing a force strong enough to hold Manassas Gap Junction in order to command the main railroad communications in Virginia, that Scott thought it unwise to take such action at present, that Scott intended to fortify Arlington Heights, send a large force into Fortress Monroe and probably retake Harpers Ferry, that he feared Scott underestimated the value of an interior movement like that proposed to capture and hold Manassas Gap Junction, that he believed the success of such a movement would result in an anti-secession majority when Virginia's popular referendum on secession was held on May 23..” (Quoted material is paraphrased from link given above.)

US Ordnance Office replies to arms request telling Dennison that he has received arms in excess of his troop allotment.

May 7 – Dennison writes Washington to have GBM’s department expanded to include western Virginia.

May 9 – Chase writes Dennison to say Lincoln will authorize three more Ohio regiments and possibly two regiments will be ordered east. “[H]e thought the remainder of the Western force would be employed on the Ohio and the Mississippi, that Colonel Anderson would organize the volunteers in western Virginia and Kentucky in place of the governors, that he trusted Major General George B. McClellan would look out for western Virginia and Cairo… and that he was sending copies of his plans of organization for the three years volunteers and the regular troops” (These are the McDowell-Franklin plans; note this highly decentralized war policy.)

GBM writes Scott for officers to organize his department. He says he has not received a dollar in federal aid not any instructions from Scott.

Dennison asks McClellan to intervene in Virginia. McClellan answers he has previously asked Scott for guidance and is still organizing.

May 11 – Dennison telegraphs Chase to get McClellan a three-year Volunteer commission, one dated to give seniority over other Voluteer generals because “Ohio must lead.”

May 13 – GBM writes Dennison that his primary cause for delay in invading Virginia is “I am in daily expectation of hearing from Washington the policy of the Govt…” which suffers from “singular & very discouraging” apathy.

May 14 – Chase writes Dennison “We have today McClellan appointed a Major General in the regular army.”

New York’s Union Defense Committee travels to D.C. to meet with Lincoln and communicate its discontent over troop issues and other matters.

May 15 – John McClernand, acting for Gov. Yates, requests from Lincoln personally the authority for Yates to mount an Illinois military operation against Missouri secessionists.

May 19 – GBM shares his thoughts on the riverine defense of Cairo with Commander John Rodgers. “I am not yet in possession of the views of the administration, with respect to ulterior offensive operations sufficiently to express my opinion…”

May 20 – Dennison reports rebel movements around Grafton to Scott; Scott answers that he should refer the matter to McClellan.

May 21 – McClellan acknowledges to the War Department acceptance of his federal rank of MG, the appointment being made May 14.

May 24 – Governors of Ohio, Indiana, and Illinois aided by McClellan, formulate war policy in a conference in Indianapolis. This is to occupy four points in Kentucky after securing Kentucky politically for the Union. GBM should be authorized to execute this concept and his forces should be increased; their state legislatures would raise additional war funds. Yates of Illinois is sent to Washington to present a memorandum on the issue.

Cameron asks GBM if he cannot act to protect Grafton.

May 25 – GBM asks Dennison to tell Yates “in carrying out … his mission … not to use my name in such a way as to disturb the sensitive complexion” of Scott’s mind.

May 27 – Border state convention, with Missouri and Kentucky meets in Frankfort. Kentucky declares its Unionism at this conclave.

May 29 – Dennison receives letter from Connecticut state house that “knapsacks and equipments for one thousand infantry had been sent by express.” The same day Morgan writes Dennison that New York cannot spare any more kit for Ohio.

June 2 – Dennison agent finds Ohio troops in Washington deplorably equipped and a laughingstock. (This sets off a back-and-forth between Dennison and Chase, with Chase on the defensive).

June 10 – Simon Buckner reports on an agreement with GBM to Magoffin. The agreement, as recapitulated in Buckner’s memo, has to do with United States (not Ohio) actions and contingencies. (The flavor of the content is Dennison’s but the stipulations are federal.)

June 19 and 20 – Chase sends letters to GBM prompting the response, “Gov Dennison has in no way interfered with my control of the troops mustered into the U.S. service … In addition to this Gov D. has exerted himself to the fullest extent in providing equipment for the troops … There has been in no respect any conflict between Gov Dennison & myself."

June 20 – New representatives of the Virginia government are selected by the Second Wheeling Convention.

(Compiled from Reid's Ohio in the War, Hesseltine's Lincoln and the War Governors, McClellan's Own Story, Dennison's correspondence on the Ohio State History website linked above, and Sears' collection of McClellan's war papers)