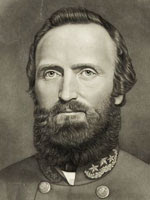 Jefferson Davis faced what would become an American military cliche in future years: top generals requesting resources with no strategy in hand but brandishing a fistfull of dire predictions to motivate their president.

Did Davis indicate a strategy of his own at this meeting? Look at some of his points:

(1) Motivation: "...the whole country was demanding protection at his hands, and praying for arms and troops for defence... he could not take any troops from the points named..."

(2) Means: (A) "...at that time no reinforcements could be furnished to this army of the character asked for..." (B) "...without arms from abroad [Davis] could not reinforce this army..."

(3) Methods: "...instead of an active offensive campaign, we should attempt certain partial operations—a sudden blow against Sickles or Banks—or to break the bridge over the Monocacy."

(4) Limitations: … We cannot afford to divide our forces unless and until we have two armies [i.e. one defending before Richmond or DC and one invading the North] able [independently strong enough] to contend with the enemy's forces at Washington [whichever of the two Southern armies USA should take on]. [Letter of Sep. 8]

(5) Aspirations: "Had I the requisite arms the argument would soon be changed…" [Letter of Sep. 8: Davis aspires to a major invasion of the North.]

(6) Primacy of Theatre: "It is true that a successful advance across the Potomac would relieve other places; but, if not successful, ruin would befall us" [without a second army between DC and Richmond - Sep. 8].

What we have here are the elements of a strategic policy.

The motivations (1) are Clausewitzian: military power, and strategy, are subordinate to political policy. The generals, certainly Smith, do not understand the purpose of troops stationed on idle fronts and postwar Smith gives the example of Bragg at the head of divisions idling in Florida. Davis understood that a force of this size located in this quiet place served a political purpose for the larger cause. He didn't articulate what that was but possibilities point to maintaining or increasing support for the CSA central government.

Davis was offended, and gave voice to this postwar, because the generals slighted his motives for the dispositions of armed forces on quiet fronts. Like many Civil War writers of today, the generals applied a purely abstract military analysis.

The means (2) are subordinate to Davis's Clausewitzian motivations. He cannot reinforce this or that army because he has calibrated an optimal dispersion of available force for maximum political gain.

His methods (3) and aspirations (5) are balanced. If Davis can build up materiel and manpower, ambitious projects (to be defined) will be undertaken. In the meantime, opportunities to hurt the enemy will be sought. Davis gives the example of defeating an independent or detached command in detail (Sickles or Banks) and he posits a raid to destroy a strategic asset (bridge).

The Civil War reader needs to think this out far more carefully than the usual authors have done. These lesser offensives have no decisive military value. They put political points on the board. Cumulatively, they demoralize a polity. They aspire to be what the military recently called "effects based operations." (Look at the linked PowerPoint slideshow and you will understand what Davis was about.)

Here is the mind-bending aspect to this. As many viable commands as Davis could deploy opposite Union armies, garrisons, posts, and geographic objectives, that is how many storehouses of "effects based operations" he would command. The more independent commands there are to score political points by breaking a bridge or humiliating a Banks, the faster the political points accumulate to deliver that weight that breaks the union's political back. More commands, more operations, more effects, snowballing politics.

Note how well this accommodates a surplus of military experience and talent.

Jackson, in independent command, consistently fulfills Davis's strategic vision; Lee, Johnston, Beauregard - these represent necessary evils, factors to stave off worst-case outcomes. The Southern public was roused by Jackson, it venerated Jackson, not because he best fulfilled Davis's vision but because what he was doing resonated with them. Davis anticipated that resonance with a policy Jackson was specially suited to fulfill. Jackson's popularity was in its way a mark of Davis's innate political and strategic gifts.

Unfortunately, the pop history reader is looking for decisive battles that won the war. This has nothing to do with Davis (or Lincoln) and blinds one to the underlying logic of events.

Davis's limitations (4) exactly mirror Lincoln's obsession; he wants an army to defend the capital and an army for field operations and will not accept McClellan's (and Johnston's) dictum that an offensive against the enemy's capital is the surest defense.

In Davis's evaluation of theatres of war (6), he does not rate Richmond-DC as decisive except in a negative sense, that loss here would be decisive. He recognizes it as decisive to the North (however) by saying an advance across the Potomac would relieve pressure on other fronts.

In sum, Davis has a framework for strategy that is entirely political. Because we are so polluted with the decisive battle doctrine, we misread the invasions of Maryland and Pennsylvania and the disconnects between Lee and Davis.

The invasion of Maryland has all the hallmarks of a Davis concept as long as the aim is the capture of Harpers Ferry and its garrison. This work combines the Banks-Sickles-bridge example into one piece. It is saturated with Davis flavor as long as Jackson commands; when Jackson accomplishes his Davis-like aims, the operation goes off the rails (typically) under the big-battle, hamfisted Robert E. Lee.

Lee represents an expedient, a high-casualty, high-risk adaptation of the Davis-Jackson model for the middle and late war that becomes necessary through the consolidations that eliminate Davis's many "effects based storehouses" into a few large lumbering commands. The Gettysburg campaign is a striking failure of Davis-Jackson style opportunism that becomes an elephantine blunder. I am convinced that Davis's idea for ambitious offensives was that the larger force, having greater menace and more freedom of action than a smaller force, would find greater opportunity to "break bridges," defeat detachments and independent commands, and put points on the board without running up giant losses, wasting materiel, and committing to "decisive engagements."

Davis's strategic policies were subject to opportunities and the vagaries of command. They were also subject to the North's capacity to shrug off minor Southern successes.