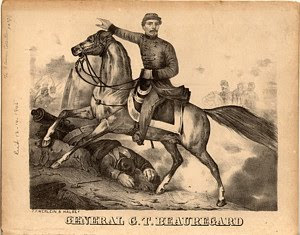 The meeting of Jefferson Davis with Joe Johnston on the 26th of September, 1861, is another one of those steep gradient events that seriously overmatches the analytic engine of the modern Civil War historian.

Some talespinners, recognizing themselves as underpowered, keep their narrative jalopies away from such high mountains. Others, committed to the doctrine that Jefferson Davis had no strategy, take care not to ride roads where the signposts mark explicit statements of Davis's strategy.

This is the invade-the-north conference to which G.W. Smith and P.G.T. Beauregard were invited. The initial account of it was created in January, 1862, by G.W. Smith in memo form (signed by Johnston and Beauregard). Davis responded to it years later and Smith responded to Davis.

In the correspondence leading up to the meeting, one sees tendencies. Then, in the meeting, problems come into sharp relief and these are problems that persist in the war.

Apart from the strategic content of the conclave (which is clear, easily diagrammed, and fascinating) there are the respective criticisms Davis makes of the generals and the generals make of Davis. These tend to get reduced to cartoonish summaries in Civil War narrative without a real examination of their merits.

Let's look at some telling correspondence before the meeting.