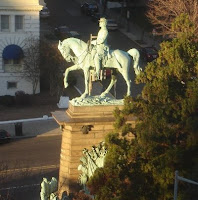 Author Greg Acken was good enough to send more McClellan-at-Gettysburg incidents. I may compile all our sources and map them in a future post. Anyway, here's Greg:

Regarding the McClellan at Gettysburg theme, I edited a grouping of a Union captain's letters that was published in 1998 called Inside the Army of the Potomac. In the letters, my subject, Captain Francis Adams Donaldson of the 118th Pennsylvania, noted that on the night of July 1-2, while the 5th Corps was en route to Gettysburg via Hanover, that an officer with a lantern standing by the roadside (this was at 3:30 AM) read an "order" claiming McClellan had again been placed in command.

"The men became perfectly wild with joy, and the scene was very exciting where we halted. Here were divisions of infantry intermingled with artillery and cavalry cheering each other as they passed, while the name McClellan rang thro' the ranks. Everyone seemed filled with enthusiasm, and each battalion as it moved past stepped to the encoraging shouts of thousands of voices in one grand chorus for Little Mac"

"A rumour being circulated just at this time, that General Hooker had been relieved and he was to be succeeded by General McClellan, the men exhibited their joy while on the march by singing and in other ways manifesting pleaasures, but we soon found the report was without foundation, and that the new commander of the Army of the Potomac was a Pennsylvanian-- General George G. Meade-- who remained in that position until the close of the war."

Additionally, the Regimental Historians of the 155th Pennsylvania (also 5th Corps) note on pg. 154: (They had just united on the march to Gettysburg with other Pennsylvanians of SBW Crawford's command)

"With the arrival of these troops also came the report, which was circulated all along the line, that General McClellan had been restored to the command of the Army of the Potomac and was on his way to join the army. General McClellan's name and popularity on this report were also enthusiastically received, but alas! it was doomed to contradiction as a mere camp rumour, as developments soon demonstrated."

It is also worth noting that in the same brigade (and thus, the same line of march) as Donaldson's 118th Pennsylvania was the veteran 22nd Massachusetts. Their reaction differed greatly from that which Donaldson recorded in the Corn Exchange Regiment when they heard of the re-appointment: (22nd Massaachusetts, p. 244-245)

"(McClellan's) name had lost its magical impact, for beyond a few feeble cheers from some of the commands, the column stalked on in moody silence"

Finally, Henry Hunt, writing about the second day at Gettysburg in Battles and Leaders (Vol. III, pg. 301), also makes note of this phenomena.

(This thread, as always, is about the sanitizing of history by storytellers. Of course McClellan was not at Gettysburg, so such incidents as these are "meaningless" and can be excised from the "true" record of events.)