Naive then and naive now

The Fourth International is fed up with Lincoln/Obama comparisons in the mass media:

Attempts to portray Obama as the heir of Lincoln's legacy involve a grotesque historical and political falsification. Lincoln will forever be associated with one of the great progressive causes in history—the emancipation of the slaves and the destruction of the Southern slave-owning oligarchy in the American Civil War (1861-1865). Obama, on the other hand, bears only a negative and reactionary relationship to the great political questions of his day.

Regardless of how one evaluates Obama, the interesting thing about the communist position, historiographically, is that it here marries in one evaluation package magnitude and specificity in outcomes. We can differ over what to measure, but these Trotskyites are measuring. 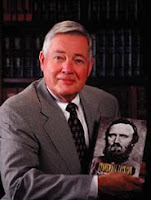 When you look at the new C-Span survey of celebrity infotainers, you see what might be a rational metric operating only at the very tip top and rock bottom of the list (Lincoln/Buchanan); everywhere else, personal affinity seems to drive selections. This subjectivity is what you would now expect, for as Civil War historian James Robertson, Jr., tells his students, history is all about emotions.

In trying to transcend the miasma of C-Span and Robertson, the Fourth International remains true to Marx's Civil War standard of "scientific socialism" which he and Engels developed in opposition to what they called the "naive socialism" of Union Generals Willich, Siegel, Schurz and so many others. (Naive socialism remains as intensely personal, idiosyncratic, and emotional now as then. When Newsweek therefore proposes in its recent cover "We're all socialists now," it does not suggest we're all Marxists now, but rather "We're all naive socialists now" -- we've become politically contemporary with Schurz, Willich, Siegel and the other 48ers.)

This is not to suggest C-Span's prizewinning infotainers are all naive socialists but that they appear naive whatever. The constant resort to baby talk in public and on the written page reinforces the the appearance of naivete and incapacity. The participation in list-making and rankings is also infantile.