"Resurrection" is an industrial term used in Hollywood that has implications for historical novelists. Francis Hamit this weekend posted some thoughts on the ACW literary side of the subject at Amazon:

From a legal standpoint, the dead have no privacy and cannot sue, nor can their relatives sue on their behalf. It's simply not going to happen.

From the standpoint of storytelling, I'm working in a particularly tough area, the American Civil War, which has a huge audience for non-fiction that despises most of the fiction created about the era. And justifiably so, because a lot of those authors are lazy about their research. My novel, The Shenandoah Spy is researched to the level of a non fiction book, but written as a novel. I made some creative choices that displeased a lot of people, including some fairly hot sex scenes with my protagonist, Belle Boyd. 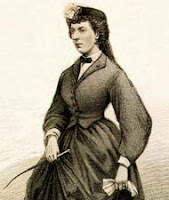 This was not gratuitous but driven by character and the storyline. Belle seduced, or was seduced by a Union Army captain, Daniel Keily, who gave her the opportunity to listen in on the staff meeting where plans to capture and destroy Stonewall Jackson's army were discussed. Belle, by her own account, rode 15 miles in the middle of the night to find and give this intelligence to Turner Ashby.

Belle was accused not only of spying, but of being "an accomplished prostitute" by William Clark, a reporter for the New York Herald. Now Clark was an odious creep and propagandist for the Union cause, but he was not a bad reporter. He didn't make things up. He had to get that someplace. (You can read his reporting online). Belle was, at the very least, an outrageous flirt. These are all established facts. Well documented. Belle's passion for for the South was a reflection of her passionate nature, and it is easy to see how she might have gotten caught up in the moment and given up her virtue to Keily. She later gave Keily medical treatment when he was wounded (she was one of the first women in the South to take up nursing, which also damaged her reputation --it was the Victorian era and mores.) So, I stand by these creative choices. They are generated by the story line, not any cheap thrill and if you read the book, you will see that it works. Sex and spying do go together as the two oldest professions.

I find that the Civil War community has an excessive reverence for historical figures. These people were not plaster saints. They had flaws and made mistakes and even fooled around. Jill Lapore, a history professor at Harvard who writes in the New Yorker, had an essay about historical fiction (March 24, 2008)which said that it often gets closer to the truth of an era than a recitation of known facts. To this I add my own observation on those "factual" sources. Much of what survives is heavily slanted.

When I was a speaker at the West Coast Civil War Round Table conference in Clover, California last November, there was another speaker who cast doubt on the Southern Historical Society papers, which were controlled and edited by a former Confederate General intent on rewriting history and creating the myth of "The Lost Cause". It was very interesting because I've found a lot of signs of disinformation in my own research (I wrote the short article on that topic for the Encylopaedia Britannica). Let me put in another way; autobiographies, especially those written decades after events, seldom do harm to their subjects. Letters are written with a filter. The journalism of the period always had a political slant. And some of those sources are obvious fiction.

Another instance is the episode at the Battle of Front Royal, where Bell ran across the battlefield under fire to give a situation report to Jackson. This was dismissed by many as fanciful and a complete invention on her part because it seems so unlikely (and unladylike) but there are two independent eyewitness accounts in the literature and a historical marker on the spot where she gave her report. A good researcher puts aside preconceptions and digs for evidence.

Belle Boyd seems to have been generally truthful. Don C. Wood, Executive Director of Belle Boyd House in Martinsburg, WV, told me as much. Sometimes known facts are overlooked and ignored. An example is Sam Hardinge, Belle's first husband, who is usually described as having died in London in 1865. Except that Belle was planning to divorce him then, and there is a article in the New York Times from 1865 to that effect. And she did. Don C. Wood told me that he has a copy of the divorce papers. She had cause. The part of her book where their relationship is so romantically described, was, of course, propaganda. Ghost-written by George Augusta Sala, a English Confederate sympathizer and published with the help of Henry Hotze, the Confederate "Commercial Agent" in London (Secret Service Chief, actually). Don said that Hardinge had taken up with an English actress while Belle was pregnant with his child, and if that were not cause enough for a divorce, the Daily of Benjamin Moran, the Union consular clerk, reveals that in November 1864, just months after their marriage, he came to the American embassy and offered to spy for them -- and was refused! Why have these facts been overlooked by Civil War academics? It may have something to do with the fact that Don Wood doesn't have a Ph.D (At least he doesn't advertise one). He's one of those troublesome people who has spent a lifetime researching this area, but that's not as important to most as having been to the right schools.

When you are working with such compromised sources, you really have to pick and choose carefully. (All of the above will be in a later novel in the series.). How does the myth of Hardinge's death persist? Out of laziness, because professional historians find it easier to quote other historians than do the hard work of examining primary sources and analyzing them. I am sure there is a fair amount of academic politics and not a little prejudice against Belle, because she was so shocking for her time. When it comes to Civil War sources, my own view is that it is all fiction to a degree.