The future of the ALPLM 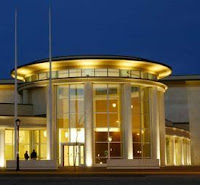 I've been waiting for the announcement of an Abraham Lincoln Presidential Library and Museum (ALPLM) leadership search, one that was lined up to start in mid-February, but in re-reading last month's press have concluded that the target time for starting the search was casual, perhaps spurious. There will be no search starting anytime soon. State historian Thomas Schwartz played coy in the waning days of Hot Rod and I think took himself out of the running thereby.

The larger question is what does the state expect of the ALPLM director? (The position is separated from any fund raising duty, so that's not a consideration.)
With infotainment celeb Richard Norton Smith I think the selectors expected publicity, that his usual public appearance rounds would result in museum plugs.
With mysterion Rick Beard, an unpublished and unknown Atlanta museum honcho, I think they looked at his record there and expected community programs and similar outreach.
Schwartz may already be cutting ribbons at Bicentennial events. He's probably standing in for Beard in the anemic Bicentennial schedule arranged before Beard's departure. This may be all the state wants or needs just now.
The Schwartz leadership trial balloons floated by Harold Holzer and search committee chief (and Blago confidante) Judy Cellini indicate a desire to resume "business as ususal" - to continue under the radar with the extremely low expectations set by Rick Beard continuing in force. The messages coming out of Gov. Pat Quinn's office point to economies; Schwartz continuing to fill-in is an economy measure.
Prediction: there will be no repositioning of the ALPLM, no rededication, no star power, no rethinking of the top role. There will be muddling along with acting and interim leadership.