This letter under the circumstances is one of the most extraordinary productions on record. When McClellan wrote it he was not General in Chief. His only functions were those of the commander of the Army of the Potomac... [H]e addressed a carefully prepared letter to the President, laying down a civil and military policy for the United States... Engaged in actual war, with the cause he was fighting for at stake upon the use of his sword, he proceeded to "save the country" with his pen." - MG James B. Fry, "McClellan and His Mission," Century Illustrated, Vol. 48, 1894

General Fry's view carries on in the Centennial doctrines of today which are still taught to all cadets and which I also imbibed through both military and civil sources in the heyday of the Centennial itself.

There is no doubt in my mind the Afghanistan commander learned Fry's lessons that (1) Below the top of the military hierarchy, political questions may not be raised (2) A field commander's job is to fight regardless of the political circustances his government has imposed on him. Reading a lot of ACW, one suspects nothing could be more heinous than for a field commander to address political questions germane to his success. 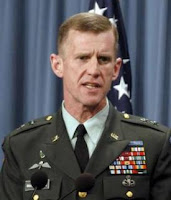 And yet, this is what McChrystal did in spades - with impunity - in his now famous Initial Assessment. The reader, searching for a military plan that justifies a troop increase, will not find it. I have worked at battalion, brigade, division and army headquarters and know what a military plan looks like. I also know what an assessment looks like: it tends to address predictable topics like state of supply, state of maintenance, force levels, absenteeism, the enemy situation, etc., and none of that is here in conventional reporting shape.

Instead, what we have is about sixty pages explaining what must change politically in order for the field force to be able to win. Read it yourself. McClellan covered he same ground in two pages, but then he was a genius.

Some of this reads like Stanton's house metaphysician, MG E. A. Hitchcock, wrote it: "The key to changing perceptions lies in changing the underlying truths" and "the system must be understood holistically."

The reader cannot be expected to share my shock at McChrystal's assessment unless he has served in the old Army himself; however, the reading of garden variety Civil War history offers some preparation. What was McChrystal thinking? "We must assist at improving governance at all levels," "the objective is the will of the people," "we require more civilian and military resources," "economic opportunity, especially job creation, is a critical part of reinegrating the foot-solier into normal life."

He was taught of the great wickedness of McClellan at Harrison's Bar and yet here he is Harrison Barring it to the nth power.

Part of the answer, I see, lies in the new strategic thinking being taught in the advanced service schools. This too was drilled into McChrystal, albeit more recently.

Let us skim the texts of the prolific strategy author Colin S. Gray (right), who is published by the Army War College and its Air Force counterpart. I'm not being arch when I warn that the following material is going to upset a great many Civil War readers.

From The Airpower Advantage in Future Warfare:

Since war is always about politics, the political context must always be the source for all future warfare of every character.

From Schools for Strategy:

... strategists should not shrink from their professional duty to study the politically purposeful use of force.

...the awesome challenges of the strategist's role in the no man's land where politics/policy and military power meet ...

... the strategist has to attempt to orchestrate military and other behavior for desired political consequences.

From Irregular Enemies and the Essence of Strategy:

I cannot state often enough or clearly enough that victory or defeat in irregular warfare is all about the beliefs, attitudes, and consequent behavior of the public.

The traditional separation of the political and the conduct of war is a lethal weakness...

The United States often has difficulty with strategy because, unsurprisingly, the "normal" theory of American civil-military relations does its best to close down the strategy bridge that should unite politicians and soldiers in an unequal but never-ending dialog over means and ends.

When Americans wage war as a largely autonomous activity ... the strategy bridge has broken down ...

You might reread McChrystal's Assessment in light of Colin Gray's writings (which are also accessible free in PDF). There is quite a correlation at work.

If there is enough of this taught at the colonel and general level, Centennialism may lose its grip on cadets ... at which point, at the academies at least, Harrison's Bar will take on a new look indeed.