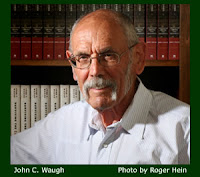 Amazon shows a new John Waugh book coming out in May: Lincoln and McClellan: The Troubled Partnership between a President and His General. Marketing copy tells us, "Lincoln and McClellan is a tale of the hubris, paranoia, and eventual failure of George McClellan, and the benign but troubled patience of Abraham Lincoln..."

Should I take the time to read Lincoln and McClellan?

The book has to tell me more than I know. I could take the "paranoia" and other cliches if Waugh tallies and describes the Illinois railroad cases that brought Lincoln (hireling) and GBM (employer) into the same courthouses across the state. I want to know more about Lincoln's role in securing the properties that helped McClellan create the nation's first (north-to-south) transcontinental railroad system (its first RO-RO system, in fact). I want to know the names of the inns in which, per Mac, they shared a bed. I want to know Lincoln's role in McClellan's Ohio commissioning, only a little of which is out there now. I want to understand more of how McClellan functioned as a Dennison protege and why Lincoln could still view him as such as late as spring, 1862. (A discussion of the whole political protege system for generals is in order, for there is no understanding GBM's ACW service outside of this system). As tallies go, I would like to see an attempt made to total personal visits between Lincoln and GBM while in Washington in 1861 - surely a record for all presidents and generals for all time.

The list goes on. I expect very little new, however.

Despite books authored pre-2001, John Waugh could fairly be described as a working journalist up to the point that Re-electing Lincoln came out. Rather than the old school reporter "with a nose for news," Waugh represents the new style, fed on a diet of press releases and eager to tell you "what everyone already knows" in a bright and interesting way.

Waugh's Re-electing Lincoln had potential. He abstained from cheap swipes at GBM. He paid just enough attention to Republican fraud to whet the reader's appetite. He made a reasonable case for the election being important by being close. On the other hand, he nowhere risked another new insight or conclusion and much colorful, relevant, and interesting material was omitted.

Since then, everything Waugh has done that has come to my attention has smacked of exploitation. I marked Re-electing as his high point while shunning Class of 1846, 20 Good Reasons for Studying the Civil War, and One Man Great Enough (hello, Bicentennial). The cake is taken by Edwin Cole Bearss: History's Pied Piper, a Concise Illustrated Biography of the Life and Times of America's Impresario of Public History.

The journalist who goes freelance, and I have employed many, becomes a slightly crazed writing machine whose job one is to get the next check rolling in. My feeling is that Waugh, who has talent and some discernment, is in that space now in the role of full-time history author. His mode is to reprise commercially successful topics on the same lines they were originally presented. He's taking other authors' encores.

For the advanced reader, what good can come of this?

Hat tip for the heads up to Andrew Wagenhoffer.