Lee as fox, fox as Lee 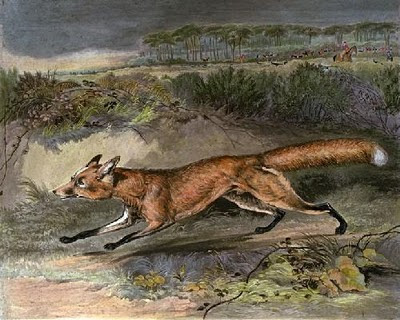 From my favorite local paper, In and Around Horse Country (Dec/Jan 2010), we get respite from the meme Lee-as-fox to see the fox-as-Lee (with a guest appearance by Traveller).

The fox was heading west now. He crossed Sam Fred Road toward historic Sunnybank, past the barn where General Lee's Traveller stayed briefly during the early part of The War. In typical wily fashion, he then doubled back and recrossed the road, taking hounds to a spot in the fence line where only one could pass at a time.

The fox has set up a Burnside's Bridge scenario. Huntsman Todd Kern takes up the role of McClellan's ADC Hammerstein at Burnside's bridge:

Todd came on to safeguard the road and encourage the pack to get through and stay with the quarry.

With the pack now strung out but still hard on the line, Todd brought on the tail hounds while whipper-in John Anderson ran with the leaders. Whipper-in Linden Ryan was briefly delayed by a lost shoe but another whipper-in who was riding with the field that day ... traded horses with her.

The anti-fox leaders are taking casualties!

Heading west they crossed the road again, running full hard at full cry in plain view of the first field.

Rally round the flag, hounds!

Suddenly, hounds went silent, as if the quarry had gone to ground.

The fox has gone to Shepherdstown, as it were.