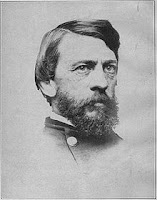 Under the generally acknowledged great Civil War commanders there is a layer of great Civil War technocrats who tend to be almost as well known, e.g. Gorgas, Dahlgren, Meigs, Ellet, etc.

I don't think Jonathan Letterman, M.D., is well known in this class. I think of him as a gift to the Northern wounded, part of the immense circle of talent recognized and recruited by McClellan. The GBM-Letterman relationship should raise McClellan a notch in the most hostile quarters, I think.

Today's Army has the decency to recognize Letterman above and beyond what Centennial historiography allows, and I commend their material to you.

One fundemental difference between Meade and McClellan was thrown into stark relief by their management of Letterman. See here for material damning to Meade.

Meanwhile, I simply cannot imagine being Southern and wounded without a Letterman or a McClellan to look after me.