OT: Re-enactors I can relate to 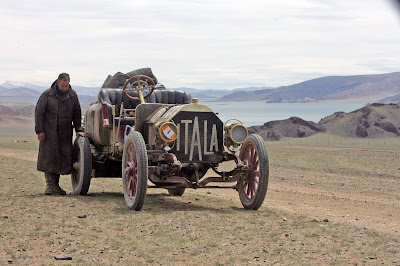 This is a history post, though not an ACW post. Please think history and ponder deeply the following.

Forty-two years after the Civil War ended, the first Peking-to-Paris road rally was held. The winner was a car made by Itala. I wonder if any ACW veterans ran that race.

It's become an triannual event. I tend to peruse the the literature issued by the organizers each time beforehand. This year, they offered this suggestion to would-be entrants: your best bet for winning this race would be to buy and kit out an 1920s Rolls Royce. Think about that.

If you are driving a Land Rover, Jeep, Hummer, or some such "off road" vehicle, please read the preceding carefully and consider what it means to you, since anyone can enter this race in any car whatever. If you are in the services and drive military vehicles, give it some additional thought. In 2010, your best technology for winning this thing is a machine created in easy range of Civil War memory.

Nevertheless, this year's results showed 1920s Rollers to be inadequate.

David (picture above) and Karen Ayre came in fourth place with their 1907 Itala. They were beaten by Nicky Bailey and Janek Mamino in a 1918 Buick Roadster. Nick and Janek were beaten by a 1923 Vauxhall OD 23/60. Coming in first were Charles and Nellie Bishop in their 1925 Vauxhall 30/98.

But oh look! There's a 2009 Ford Ranger that did magnificently in 163rd place! Oh, and there's a smashing result for a 1999 Toyota Landcruiser in 165th place! They finished the race. Hooray.

Think I'll go get some fat auto loans so I can buy a craptastic computer-controlled sporty 4WD mud runner to take me to the mall. Just don't ask me to go Peking to Paris.

In 1907 a model car of that year won the race. In 2010, no model car of the current year could dream of winning this race, while hundred-year-old stuff is totally competitive.

It takes a road race to show us how we and market tastes have reshaped technology.