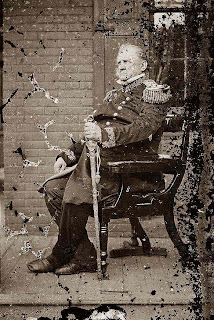 Having traveled this far in the analysis of Scott's late-career, early-ACW operational art, we would be remiss if we did not consider the effects on Lincoln of this primary schooling in war.

It is in no way fair to hold Winfield Scott responsible for lessons mislearned by Lincoln, nevertheless I have long felt that Lincoln's bizarre military management owed much to misapplying what he thought he saw during Scott's two offensives, the first of the war that he could observe from headquarters.

Like one of Konrad Lorenz's newborn ducklings, Lincoln was (I think) "impressed" at the right moment in his learning curve with a lot of "wrong" data.

This is obviously speculative but I have found it convincing and useful over the last 15 years. We all agree that Lincoln was a learner and we should agree that Scott's example offered lessons. This is a list of things Lincoln (I believe) might have surmised as reflected in presidential decisions taken later in '61 and '62:

(1) Campaigns can be run from an office in Washington using telegraph, mail, and couriers.

(3) The relief of high commanders deserves no contingent preparation and no coordination.

(5) The state of a force can be adequately surmised from reports and letters.

(6) The state of ground can adequately be surmised from maps.

(7) Subordinates can appreciate the commander's intent at great distances with minimal input.

(8) Logistics is not much of a factor in campaigning.

(9) There is no military reason for one force to get away from another without harm.

Scott did not mean to set a military example in his first offensives - that's not my charge - he made accommodations given his condition, lack of staff, and a few personal (non-military) predilictions. They represented expedients that inadvertently set a horrible example for the new president. Scott compensated for his own accommodations and expediencies with a store of military knowledge the president did not have.

I wonder if each point here speaks for itself or if illustrations of Lincoln's decisions need to be recapitulated.