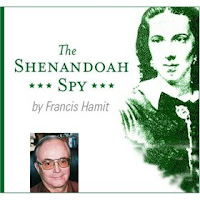 Author Francis Hamit recently sent me his new novel, The Shenandoah Spy, and it was full of surprises.

The story, liberally sprinkled with historical figures, moves at a good pace. There is a lot of dialog, perhaps too much. There was a Belle Boyd sex scene and it gave me pause (do we want our historical figures imagined that way?).

Overall, the characters were rendered somewhat flatter than their reality. Two examples. David Hunter Strother was an opinionated and idiosyncratic artist-in-uniform; here he comes across to me as Pvt. John Q. Doe. Gen. James Shields strikes one here as bull-headed and forceful; his hesitancy and nervousness are missing.

The Strother many of us met in his Virginia Yankee is not in this book. Likewise, the Shields we knew from Maria Lydig Daly's diary - a general in constant need of reassurance, constantly justifying himself - seems absent from these pages.

I want also to talk about the technology behind this book. It is sold through a medium called Amazon Shorts. Amazon, acting as a publisher, puts out e-files in exchange for micropayments. Mr. Hamit has here written a book, then broken his chapters up into sections for Amazon to render into PDF files. The result is a serial novel avalable for 49 cents per installment.

The deliverable is laid out like a book; instead of 8.5" x 11" (letter) format pages, the electronic pages are book sized. For reviewers, Amazon prints out the whole volume and binds it in a glossy paper cover - as if it were print-on-demand. Spacing is at 1.5 lines for reading off a screen, I suppose. This "review copy" is the only paper artifact that will ever exists unless the buyer prints the book off on a desktop printer. There is no print edition made available to Amazon customers.

The paper artifact does not seem to have an ISBN - although there is a 13-digit barcode on the back of my review copy - it does, however, have the Amazon equivalent for stocking, an ASIN code.

Amazon describes its Shorts program here and I notice it promotes this delivery system as one means for authors to get their out-of-print backlist into circulation.

Well worth some study, I think.

Had a very pleasant conversation with Francis Hamit this evening who said that every character in the novel was authentic save one - and he challenges readers to identify that one. He said also that the sex scene with Belle Boyd helped to address a newspaper charge that she was a very accomplished prostitute. His description of the research done and the stories behind some of his characters was made for a very rich historical conversation.

Mr. Hamit is working up a series of novels on female spies, each of which requires considerable research.

Remarking on my failure to read the novel through, I told Francis that historical novels are not my cup of tea. But for those of you interested in this form, Amazon has made it cheap and easy to sample the Shenandoah Spy. I will be revisiting my own hardcopy.