Carlyle and Marx on the Ohio 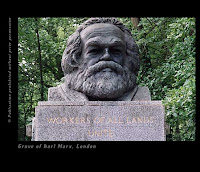 I see from the papers that the backlash against the Lincoln Bicentennial has begun and it is the material, not the principle, driving initial complaints.

Citizens Against Government Waste: "We're concerned that while this money is being spent, other priorities are being under-funded... We think making sure kids get a proper education and health care is a lot more important than this celebration."

Expect to hear more of that. I'm expecting formulas along the lines of "Lincoln would prefer us to ..."

Meanwhile, Indiana's would-be celebrators, having submitted their wish-list for state funding, are now having to make-do with a measely one million dollars. Guys, no hard feelings, check back with us in a hundred years.

The heritage tourism noises coming out of Indiana are fascinating - as they would be when no one has seriously pondered the question "Why do this?"

"People just do not associate Indiana with having such an important part in Lincoln's development and his life," [Connie] Nass said. "Certainly his life was formed from many of the values he learned while in Indiana." 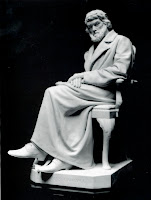 Materialism is now the subtext of these state celebrations. If you are not a Marxist, you can still subscribe to Nass's unconscious equivalent. You did not, after all, need to be a Marxist to be a socialist in Marx's day; he called the competition "naive socialists." Here we have naive historical materialists.

What happens to Lincoln next, after HM is done with him is that he is remanded to Thomas Carlyle's Great Man school of history. Carlyle: "The history of the world is but the biography of great men."

If you are not on board with Historical Materialism or The Great Man Theory, you are going to have a rough Bicentennial. Promise.

Now here's the fun part, the piece I'm really looking forward to. Forget the tourism spokespersons for a moment. The big show is going to be all those Lincoln authors on TV, radio, billboards, in newspapers, talking out of their thoughtless, implicit HM/GM positions who are going to hit a solid wall of academic hostility and scorn. See much HM around campus lately? Seen any GM in the last 50 years?

So now you know where the Bicentennial fireworks show will be.