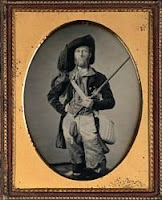 Got quite an eyeful of daguerreotypes at the Nelson-Atkins photo show, "Developing Greatness," in Kansas City this week. Had no idea how much better an image the daguerreotype offers compared to paper photography. The silvery metal undercolor makes the black and white overlay incredibly crisp and vivid - almost holographic.

Naturally, this effect is lost in paper reproductions and book plates. I got a second shock, however, in noticing how much closer to paper both computer and CRT renditions in general are. You would expect what is essentially a lit tablet to capture some of the magic of daguerreotyping but the result is more muting and more muddiness, as with the fisherman (circa 1850) shown at right.

The museum did a superb job lighting these CDV-sized images, so if you're in driving range, go and enjoy the sensation of seeing how technology has walked backwards since Louis Daguerre.