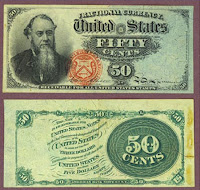 Despite the publicity surrounding the Fletcher Pratt Award, Pratt (known to me in youth as a sci-fi author) is fairly representative of that corruption that gripped the Centennial generation of storytellers. In addition to the suppression of evidence to enhance the narrative "reading experience," these gentlemen also dealt in artful omissions to create false contexts that allowed their narratives to work. Pratt offers a fairly stark example of this in this passage from Stanton: Lincoln's Secretary of War:

It would seem, then, that there is little mystery in why the President should appoint to the War Office one of the strongest Union men in Washington, a Breckinridge Democrat, a friend of McClellan, an incorruptible, and a man of unlimited drive and capacity to handle detail.

Pratt is leading us forcefully to the pool of merit – but will we drink up?

Aside from being recommended to Lincoln by Seward, Chase, and Cameron, at the time of his appointment Secretary Stanton was cousin to Ohio powerhouse Benjamin Stanton who had been Republican chairman of the U.S. House of Representatives' Military Affairs Committee up until March 2, 1861. He had just lost a Senate contest to john Sherman but was poised to become lieutenant governor of Ohio.

His joining the Lincoln Administration should be the crux of any Stanton biography and whether these (suppressed) political considerations were decisive in that - this is the true business of Pratt's measely passage. The attempt to manage the story through "sins of omission" is all too common in ACW history. Make that the criteria for a new kind of Fletcher Pratt Award and candidates will abound.

p.s. This post has been corrected (5/28/08). It referred to the Stantons as first cousins, however it was their fathers who were cousins. It also suggested, via its syntax "at the time of [Edwin's] appointment" Benjamin was chairman, etc. Note that he had been chairman in the previous (36th) Congress as shown in the edits above. A lengthy post on Benjamin Stanton is in the works.