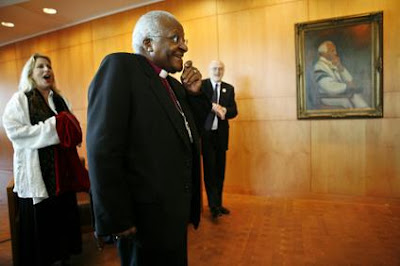 When Rick Beard took over the Abraham Lincoln Museum and Presidential Library (ALPLM) in 2006 there were no photos accompanying the news stories posted to the WWW. Since that time he has managed to keep any images of himself off of the Internet - as befits a man who surrendered his posh office in order to work out of an obscure office behind some emergency exit doors.

Recenly, however, the Illinois Bicentennial Commission forced a mug shot out of him (right) for its Kremlin Wall. (Let's see how many of these worthies accompany Gov. Blagojevich to prison next year.) The shot is in soft focus and rather indistinct. Is that a mustache? A goatee?

More in keeping with the Mysterion's cryptic persona is the snap (topside) captured by the State Journal Register last week on the occasion of the unveiling of an amateurish portrait of Bishop Desmond Tutu. The blurred little figure on the right is Rick Beard - the first "action shot" of the man we've had in the last two years. He's hovering in the very best docent manner just beyond earshot of the embarassed mutterings of the bishop. In the same manner he managed to avoid mention in the story, which took place in his facility.

We now at least have a general idea to go on, should we encounter him at one of the many dazzling Bicentennial or Sesquicentennial events upcoming.