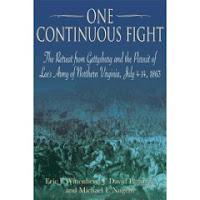 This month - I'm not sure of the day - a major revision of the received wisdom of Gettysburg's aftermath will appear in a book called One Continuous Fight.

Written by Eric J. Wittenberg, J. David Petruzzi, and Michael F. Nugent, "Exactly what Meade did to try to intercept the fleeing Confederates, and how the Southerners managed to defend their army and ponderous 17-mile long wagon train of wounded until crossing into western Virginia on the early morning of July 14, is the subject of this study" (to quote the blurb).

The authors are working to change minds; the care they have taken in analyzing events is something I can attest to personally as well as to the soul-searching surrounding their treatment of evidence. This is eminently worth your time and money and it will be interesting to see how this book affects future histories.

You can get a taste of One Continuous Fight in this author interview.

p.s. I see Eric and J.D. have set up a book site for Plenty of Blame. There's an interview section where they made points very much like Nosworthy's quoted at the end of this post. Here's Nosworthy: "The ease with which a patient researcher can come up with a new but justified interpretation of an already well-documented event, or be the first one to plot what is still uncharted territory, is truly counterintuitive."

Now here are Eric and J.D.:

Petruzzi: One thing that surprised me was the amount of primary source material that exists that had never been used before. It may very well be because no one has undertaken this project (of such narrow scope) in such detail before - but I tend to think that no one has dug as deeply on this topic. As for specific surprises, there were two that stand out. The first involves the issue of whether Stuart actually made an effort to keep contact with Robert E. Lee and inform him of Joe Hooker's/George G. Meade's movements. The second was the discovery of an item that could have, but for fate intervening, completely changed the way the Battle of Hanover unfolded on June 30. I will resist the temptation to reveal the nature of these surprises here - the reader will have to read the book to discover what they are! Suffice it to say that each of these items turned out to be blockbusters regarding the larger questions involving Stuart's ride.

Wittenberg: Like J.D., I was surprised by a lot of the material that surfaced during our research. Period newspapers proved to be an absolute treasure trove of great material, and we were both surprised that nobody had ever made effective use of these sources before we did.