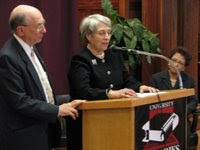 How did the Grant Society's Grant Papers end up at Mississippi State? We have a new clue: Mrs. Marszalek is a political powerhouse in the state. If her husband, an emeritus, wanted the archive nearer home, she had tremendous wherewithal to prepare a warm reception for them:

Mrs. Marszalek rates her own page on the MSU website without having been employed by the school or published by its press. Her relationship with MSU is strictly that of patron:

Her own papers! So students can study her life and career!

Sorry, I'm getting distracted. The bullseye is that "She and her husband have established endowed library funds" at MSU.

The closely guarded secrets surrounding this transfer are starting to come unraveled. We'll get to the bottom of this. Keep watching and if you have a clue, send it in.

p.s. I have stopped referring to this archive in shorthand as THE Grant papers in deference to the important point made by Brooks Simpson that they are not THE Grant papers, but rather the papers of the Grant Society. "... just as so much of this story has been confusing." Amen