"Our ancestors, the Gauls" 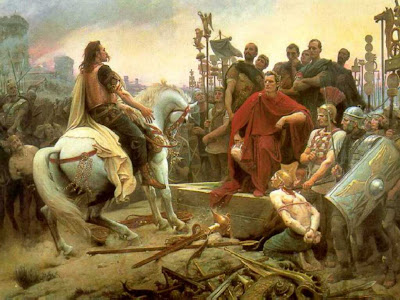 A bill supporting Sesquicentennial activity in Kentucky has made it out of committee and now lumbers on to the next milestone.

These sorts of stories are interesting places to gather clues about who is driving these bills and why. As a general (maybe shaky) observation, it seems to me that Civil War readers are absent and that in our circles there has been no discussion about what a Sesquicentennial is for and what it should do.

A state senator promoting the Sesquicentennial had this to say:

It is important that we educate those who do not realize our state’s significance in this historic era and recognize our ancestors for their roles in the war and its aftermath.

The question, "Why is it important" is left on the table.

His remark seems to divide Kentucky into two classes of inhabitant: "our ancestors" and "those who do not realize," i.e. the transients who make up the majority of the population of any state nowadays. The motivation, then, seems to be one of integration.

I don't think it will work. That part of the transient national labor pool that finds itself in Kentucky is amply served by all sorts of non-local culture. It also imagines itself "national" in character - witness the abysmal turnouts in local elections.

If the sesquicentennial is a cultural rearguard action designed to drag "those who do not realize" along the path of state history I think it will fail.

In fact a specific image of futility comes to mind: those thousands of colonial African schoolrooms where the children began their very first French lesson with the words, "Our ancestors, the Gauls..."