The root causes of Retrocession 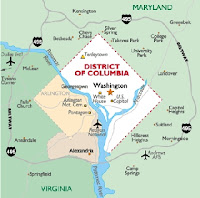 We are all taught, when young, that the District of Columbia was formed by combining bits of Maryland and Virginia. Many people, like me, go through life with that story in mind.

Along the way, we encounter modern, up-to-date maps like the one shown at right - you recognize that familiar diamond shape immediately, I'm sure, with part of both states inside the dotted line. In fact, Avis is handing out diamond shaped maps to renters at this moment.

Got an atlas handy? Behold the diamond. Ask a child to draw the capital, behold a diamond.

It was not until I began to work here that I realized all these diamonds were zirconium. The District was carved out of Maryland only. The Virginia pieces were retroceded to the state in 1847. According to this site, Retrocession was tied to the controversy over slavery.

From Retrocession to Secession. Somebody write the book.

I wonder what the Union's war would have been like if part of DC had not been retroceded, if Virginia's 1861 occupation of Arlington had actually been an occupation of the District. Would Lincoln have been less obsessed with protecting the capital? Would that rebel occupation have been an innoculation of sorts?

Meanwhile, gaze upon the strangeness that represents the true shape of DC.