My favorite Union generals, indulge me 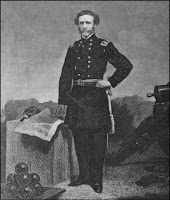 After these years of blogging, I suppose it's time for a scorecard type of post.

For your amusement, I like
(1) McClellan. I would match him against the entire 19th Century post-Napoleon worldwide stable. He was the only child prodigy ever put at the service of a government at war. He represents the "genius of democracy" - i.e. "us." He designed fortresses, sold advanced US Navy technology in Europe, translated Russian cavalry doctrine, re-invented railroading to include ro-ro, and fathered combined operations with the Navy in combat operations. We will never do better, ever.
(2) Fremont. The prototype of what would become in the 20th Century the "dollar-a-year man" in government service. I can find no fault in him at any point in his military career. He was the citizen soldier incarnate. There is no Fremont decision I know of that I would reverse. As a potential Lincoln opponent in 1864, he was doomed from day one of his military career.
(3) Grant. A political genius, as Brooks Simpson has pointed out, he married that to military aptitude in the cause he loved. His staff work was sloppy. His penchant for vendettas disturbs me. But he was a great patriot and a great slogger, military and political. His personal victory as the premier celebrity of the ACW was something he earned, not something Lincoln or the Republicans bestowed.
(4) Banks. He combined every advantage of political generalship with that of polical leadership. He might best a Jackson one day and then best a Butler politically the next. He was a thorough Lincoln man (and McClellan man) who earned every chance he was given and more besides. He had moments of failure on the political side and the military side. Lincoln failed him. We should emulate him.
(5) Lyons. We are all Lyons when young, and yet none of us reaches that perfect Lyonistic state of aggression and rage and mortality and victory in service to our cause. Lyons is utterly inspiring and eminently approachable. Patriotic rage and fury perfected. Go and die like a man. Lyons showed us how.
Where's Sherman, you ask. I'm still thinking.