Desertion then and now 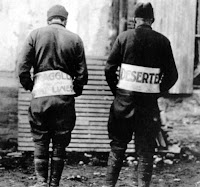 A modern note for all those readers who count on payroll musters to derive Civil War strengths:

But some unit commanders, wary of scrutiny from their superiors, go out of their way to improperly keep deserted soldiers on their rosters, and on the Army’s payroll, two officers said in interviews. To counter that, the Army adopted a new policy in January 2005 requiring commanders to formally report absent soldiers within 48 hours.

Other parts of today's news read like a page from the ACW as well:

Army prosecutions of desertion and other unauthorized absences have risen sharply in the last four years, resulting in thousands more negative discharges and prison time for both junior soldiers and combat-tested veterans of the wars in Iraq and Afghanistan, Army records show.

The increased prosecutions are meant to serve as a deterrent to a growing number of soldiers who are ambivalent about heading — or heading back — to Iraq and may be looking for a way out, several Army lawyers said in interviews. Using courts-martial for these violations, which before 2002 were treated mostly as unpunished nuisances, is a sign that active-duty forces are being stretched to their limits... [additional unwarrented journalistic inferences deleted] .

We went to some lengths ourselves, during the Vietnam war, to keep AWOL soldiers off the desertion rolls as long as possible. Often, we were concerned about the soldier embarked on some sort of mistake. Desertion also reflected on the command. Imagine the suppression of AWOL reports if we had been elected by our privates.

It is a terrible mistake for the Civil War reader to use payrolls as indication of unit strength; to then compare both sides' unit strengths on the battlefield; and then to make sweeping judgements about personalities based on numbers thought to be real when they are in fact false.
That falsity rests in part with desertion and the natural feeling against reporting desertion.