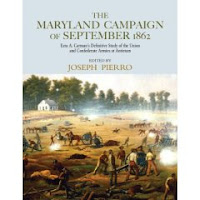 Now that editor Joseph Pierro is on the verge of sharing an edited, public edition of the famous Carman manuscript (due out in December), we can reasonably wonder whether and how this will affect Maryland Campaign studies to come.

Revisionism to come?
Researchers have resorted to the manuscript extensively in the past but they faced a mass of unattributed information which they then had to decide whether to use and how to weigh. With this full editing/attribution completed, the business of weighing and using Carman's unique sources is clarified. I'll certainly be doing a close reading of this when it comes out and expect some surprises. My gut feeling is that the Centennialists who mined Carman-in-the-raw had a much easier time suppressing evidence they didn't like because it was unatrributed or only partially attributed. Let's see what emerges.

The publisher's strategy
Back in August, blogger Paul Taylor contacted Pierro's publisher who divulged some (for me) curious project facts about this forthcoming book. First, no maps. The atlas Carman developed will be available online only. Second, a resort to print-on-demand technology to produce a short, pricey run aimed at libraries. Part of the pricing could be attributed to length - nearly 1,000 pages. But this library-centric plan underestimates Carman's commerical potential.

Carman's Goodwinisms:
Joseph Pierro himself has said some interesting things about this effort in private correspondence which he has permitted me to share. I asked him if he noticed a lot of Goodwinisms in the text.

Yes, that's VERY much the case. I'd say he [Carman] gave attributions in perhaps 25-30% of the cases, and those in turn run from full author/title/page cites to cryptic things like "The historian of the 10th Massachusetts writes. . . ." And sometimes what he was quoting from wasn't a published source, but his private correspondence with veterans (which required me to go through all his papers and try to find a match). Or sometimes he'd just give a name, but you didn't know if it was a book, or an article, or a speech.

Had I realized how much was going to be involved at the start, I probably would have been scared away from undertaking the project. Ignorance is bliss. . . .

Trying to reverse engineer the entire ms. was what turned a relatively straightforward project into a two-year effort. It was worth it, though. I'd say I managed to find the source for all but maybe 15-20 quotations.

"Reverse engineering" a manuscript - sounds horrible. He explained in a follow-up:

I'll be honest. Ten years ago I don't think I could have begun to complete this project. Recent breakthroughs in massive digital library projects made all the difference. Thanks to things like "Google Books" and the University of Michigan and Cornell University's "Making of America" project, thousands of imprints from the nineteenth cuntry have been completely digitized in word-searchable formats. Sites like these proved invaluable in trying to identify the source of hundreds of excerpts that Carman placed within quotation marks, but for which he neglected to provide complete citations.

The recent explosion in bibliographies--both online and printed--also helped immesurably. When Carman says simply, "The historian of the 10th Maine writes," Dornbusch's 4-vol. Military Bibliography of the Civil War would give citations for all known histories for that unit. From the copyright dates it was easy to determine the ones to which Carman would have had access, and then it was simply a matter of flipping through the relevant works to find the sentences in question.

FORTUNATELY, most of the nineteenth century unit histories were all microfilmed commercially in a gigantic set, available at most large reserach libraries. For the really rare items, I am fortunate to live in the greater Richmond area. Between the rare book room of the Lib of Congress, the Va Historical Society, and the Library of Virginia, there wasn't any imprint I wasn't able to access eventually.

Looks like we have some serious editing to give us a foundation for (perhaps) some serious reconsideration of our "oft-told tale" of September, 1862.