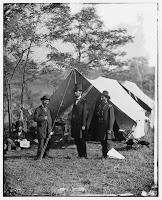 Cutting through the IIRCs in yesterday's post, we find Wilson (via Longacre) assigned to McClellan's staff on September 8, 1862 after a spell on the coast with Hunter and Gillmore. Ten days after Antietam, Wilson received a new assignment, and travelling to Washington, he met McClernand. Recalled to McClellan's camp for court martial duty, he bore a message from McClernand to McClellan (says Longacre).

At this point, McClernand had already pitched his new troop-raising plan to Lincoln, proposing his western men be formed into new regiments and assigned to him for the capture of Vicksburg.

McClernand, in Washington, was about to embark on a visit to the battlefield and McClellan. Wilson was to pave the way with a Western offer McClellan could not refuse. (This, again, via Longacre.)

If all this is news to you, take pleasure in Civil War history, where a long tradition of authorial negligence and irresponsibilty breeds innumerable surprises for the reader.

(Top right, McClernand and Lincoln at Antietam - ever wonder what they were doing there?)