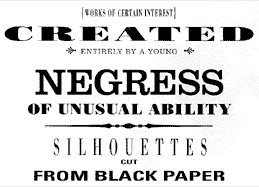 A special Kara Walker Civil War exhibition will be mounted at Harvard's Fogg gallery to coincide with the swearing in of Civil War historian Drew Gilpin Faust as president of Harvard. An intelligent press release would note the overlap in interests and viewpoints in the two women. Such a release has not been issued.
There is a news story, however, from which one gets the impression that the Fogg curators misunderstand Faust's public persona as a Civil War historian, not realizing that her interests flow from the same race-and-gender matrix as Walker's.
Instead, one gets the sense that the curators are saying, "So there's your Civil War, President Faust!" "We'll give you Civil War history!" "Take that!" (I have known many gallery owners and curators in my time. They are not what you would call broadly cultured people, nor does their work - a branch of show business - allow them to be "nice.")
There is an emphasis in the reporting here on shock. If the organizers expect shock content to "stimulate discussion" (code word for "offend patrons") why stage it at Harvard? Who there will be shocked (offended)? And who there, shocked or not, is capable of mustering even a short conversation about the Civil War and what it means, whether that conversation be Faust-flavored or regular formula?
(Top: A Kara Walker poster for one of her earlier shows.)