CWPT on the Sesquicentennial 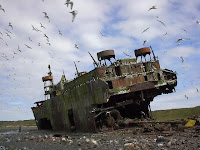 When he's not staging fashion shows, Rick Beard is head of the national "Civil War 150: The Sesquicentennial Initiative." The group doesn't have a website yet, hasn't issued a press release, and is keeping well out of the way of any planning, organizing, or fund raising.

I asked Civil War Preservation Trust if they've had any dealings with this cryptic mysterioso, whether they sensed drift nationally, and whether they would be willing to play a leading role in coordinating the Sesquicentennial. Spokesman Jim Campi answered:

In regard to the federal Sesquicentennial legislation, CWPT is certainly concerned about the progress of federal legislation. We are hoping to be able to put some resources behind it in the next few months. Our reluctance to do so up to now is because the current legislation, despite its other merits, does not have a land preservation component. So our involvement would mean scarce money and resources being diverted from efforts that much more directly aid in the acquisition of historic properties. Of course, a federal commission could and likely would indirectly aid in preservation, by generating public awareness and interest in the Civil War.

There are likely other ways we can help promote the Civil War Sesquicentennial as well -- and are certainly open to suggestions.

I'm sensing ever more momentum for localized anniversary events; ever less interest in a national program. At what point can we declare the national effort beached and abandoned?